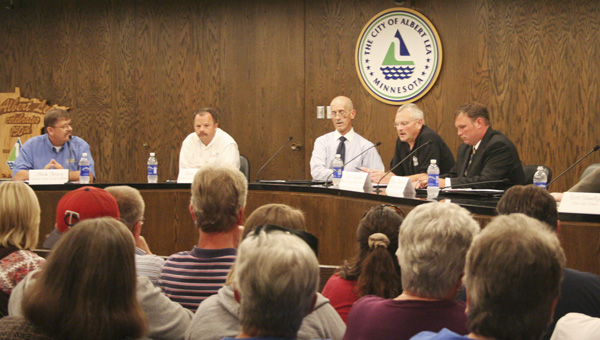 Leadership, ICE contract among hot topics at the Wednesday forum

Freeborn County Sheriff’s Office candidates debated their positions on issues like leadership in the Sheriff’s Office and the Immigration and Customs Enforcement contract Wednesday night at a forum sponsored by the Albert Lea-Freeborn County Chamber of Commerce.
The four candidates at the debate were incumbent sheriff Mark Harig, Ryan Merkouris, Bob Kindler and Marc Johnson. All the candidates have worked at the Freeborn County Sheriff’s Office at some point in their career, though only three of the candidates currently work there.
Tribune Publisher Scott Schmeltzer moderated the forum and read questions submitted via e-mail and from the audience at the Council Chambers in City Hall.
About 60 people were at the forum. Candidates were allowed three minutes for opening statements, one-minute answers to each question and a two-minute closing statement.
Each candidates’ opening statement said a little about them as a person, where they grew up and some of their job experience. Most also gave a couple of goals they would like to achieve if elected sheriff. Johnson said in his opening statement that he has seen problems in the Sheriff’s Office in the past four years. He also said loyalty has been demanded of him and he thinks it should be earned. 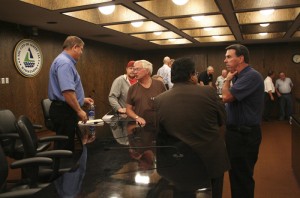