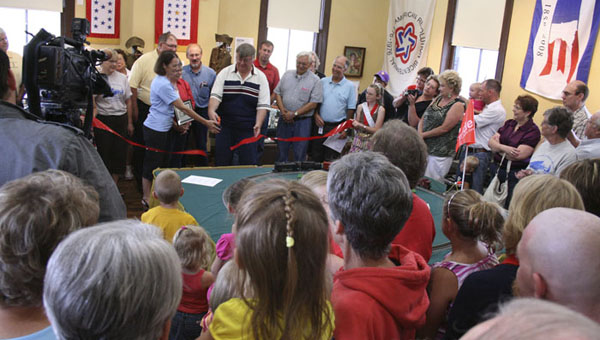 People crowded the Wells Depot Museum Friday to see the ribbon-cutting of the new museum. This was the first day the museum was open to the public and was one of the first events for Kernel Days. -- Kelli Lageson

WELLS — Kernel Days kicked off with many events on Friday. One of the first events was a ribbon-cutting at the newly-renovated Wells Depot Museum.

The museum was open to the public for the first time on Friday morning. Residents and visitors alike were able to see all the displays and listen to songs sung by the Riverblenders Quartet. About 70 people were at the small museum to see the ribbon-cutting ceremony.

“I think it’s great,” Bricelyn resident Harold Lura said. “I was hoping they would restore this.”

Lura came to Wells just to see the museum. The museum has special hours of 11 a.m. to 5 p.m. Friday, Saturday and Sunday for Kernel Days. Wells Mayor Shannon Savick spoke Friday and said the railroad depot turned museum is “a great asset to the community.” 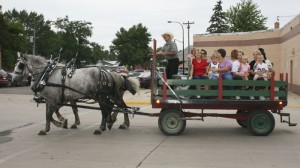 Kids and parents were able to get a ride on the horse-drawn wagon Friday for Kernel Days in Wells. -- Kelli Lageson

The museum staff also planned to have Big Ben and Brian’s Concertina Band at the depot on Saturday from noon to 4 p.m. The depot was built in 1903 and had been recently renovated after the historical society received grants and raised funds. For Kernel Days the staff had a working model train and track set up, musical groups for entertainment and all the displays were set up for people to look at.

Other events on Friday included the fifth-annual free lunch at Wells Federal Bank, a dodgeball tournament by the skate park, tractor rides and races, music by the Red Lipstick Band and fireworks to finish off the evening.

Jill Koehler, marketing coordinator for the Wells Federal Bank, said the free lunch on Friday has been a fun tradition. The staff typically makes about 1,000 hot dogs for the event. They also set up horse-drawn wagon rides and games for children. Koehler said the bank does the free lunch for the community and residents.

“It’s a great way to be a part of Kernel Days weekend,” Koehler said. “It’s fun to see everyone come out.”

Events planned for Saturday include a youth group breakfast at United Methodist Church, a farmers market, a classic car show downtown, a kids pedal tractor pull. Events at Half Moon Park on Saturday included a bocce ball tournament, inflatables, food stands, a ventriloquist and cow plop bingo. A street dance for Saturday night was planned with entertainment by IV Play, and an outdoor movie featuring “New In Town” was planned at the Bevcomm Stage. 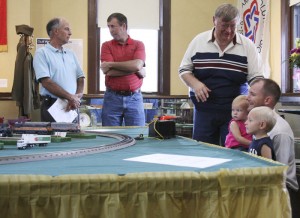 Before the ribbon-cutting ceremony at the Wells Depot Museum folks gathered to look at a model train set and all the displays inside the museum. -- Kelli Lageson

Sunday events include a pancake breakfast at the local Veterans of Foreign Wars Club, a youth group breakfast at the United Methodist Church and the annual parade is planned for noon on Sunday. After the parade live performances are planned by the Minnesota Over 60 Band, Jim Lawrence Orchestra, and Zuhrah Pipes and Drum Band.

Wells resident Lorraine Sauer said Kernel Days is a fun celebration. She works at a food stand at the park selling hamburgers and homemade pies.