“Everything is nearly copacetic. I keep about average. I lost a buttonhole this morning. I almost had my checkbook balanced. I was off by only a few decimal points. Fixing my contact lenses with tape doesn’t work as well as it did on my eyeglasses. I’m thinking of selling that female sheep I have in the backyard. With her, it’s all about ewe. I went to Doc Splint Eastwood to have my subtractenoid checked. That’s like an adenoid, only removed. Splint told me that I need to take things less easy. He said that medical science has discovered that nuts are good for us. That’s why I eat a lot of doughnuts. My sister Clarabelle dropped by the hovel yesterday.”

“How is she faring?” I wonder aloud.

“She got married. Her new husband didn’t come with her because the humid weather makes his wooden leg warp. She was wearing the biggest diamond ring I have ever seen. It was like one of my prize pumpkins only smaller. Clarabelle told me that it was the Guttormson diamond. She told me that it was filled with carats and was beautiful beyond belief, but it came with a terrible curse.”

I was manning a booth at the Steele County Fair for the Friends of Rice Lake State Park. The booth featured many things, but one that demanded much attention, especially from the younger set, was the monarch butterfly display. The exhibit offered monarch butterflies in many stages. There were eggs, caterpillars feeding on swamp milkweed leaves, chrysalises more beautiful than any piece of jewelry and butterflies emerging before appreciative eyes.

After a butterfly had been in the world a few hours, I’d find a willing child to release the beautiful insect. That was not a hard job.

One 4-year-old girl was with her grandmother. We moved outside, and I placed the butterfly upon the open palm of the little girl. The girl had a smile bigger than her face. The butterfly refused to fly. I told the little girl that I could put it back and we could try again later, but she would have none of it. Many people stopped to smile at the little girl with a butterfly on her hand. Others took photos of the young lady. The butterfly remained in place for five minutes before flying. I thanked the little girl and told her that her butterfly was headed to Mexico. I don’t think she heard me. Her smile was covering her ears.

I love orioles. Their beauty enhances my existence. I feed them grape jelly and orange slices. That’s what I pay them to delight me. I’m getting a great deal. 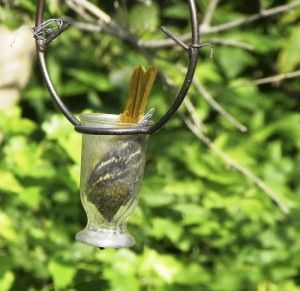 An oriole in a jam. - Photo courtesy of Al Batt

I have a combination orange slice and grape jelly feeder. A raccoon had broken the cup holding the jelly. I replaced it with a small jelly glass. It seemed appropriate.

I was talking on the phone, looking outside at three wild turkeys walking through the yard, when I noticed the urgent situation. The glass had been emptied and a young oriole had attempted to recover the last remaining morsel of the sweet stuff. It had stretched as far as it could. Its bill captured the bit of jelly. That was a good thing. The bad thing was that the oriole was wedged inside the jelly glass and was unable to move, let alone free itself.

The oriole was freed unharmed. I’ll keep the jelly glass filled to the brim.

The weather had been muggy and buggy, but the sky was an endless blue.

My brain had become all thumbs. I decided to commit nature watching. I find comfort in a walk. A walk to me is like Tara to Scarlett. I go where my feet want to take me. Each walk is a new experience — going with an incredible feeling of staying.

Birdsong was sparse but thrilling. I watched swallows doing some fanciful flying overhead. The walk gave me something to cling to when so much had been taken away. It takes a good day and makes it into an exquisite one. Birds, insects and plants cause my capture by the beauty and mystery of the natural world.

Some might say that a nature walk is nothing more than the simple ebb and flow of daily life, but it is so much more. A stroll makes me realize that ours is an impoverished language. Words cannot describe the bliss a nature walk brings. It’s a walk of appreciation and daydreams.

Ancient Greeks and Chinese kept male cicadas in cages for the joy of listening to their music. Taoist Chinese considered the cicada to be the symbol of hsein (soul). They interpreted the cicada’s shedding of its skin as an example of the soul disengaging from the body at death. In the Iliad, Homer compared the back-and-forth comments of philosophers to the songs of cicadas. Aesop’s fable of “The Grasshopper and the Ant” that serves as a moral lesson of hard work versus sloth, originally referenced a cicada instead of a grasshopper.

“How many broods does a robin have?” Typically two, with three being uncommon. If a robin was successful in raising young in a nest, she’ll sometimes build a new floor for that nest to raise another brood or may build a nest on top of one in a perfect location.

Robins don’t reuse a year-old nest. Old nests become frail, parasite eggs or larvae may overwinter in a nest and attack nestlings, and robins have an instinct to build a new nest each year. About 25 percent of hatched robins survive a year.

Keep an eye on your yard; if Eurasian collared-doves aren’t there, they are on their way.

The world’s oldest recorded tree is a 9,550-year old spruce in Sweden.

Wild cucumber, an annual vine covered with mounds of tiny white flowers, is sprawled over tree branches and fences.

“Those who dwell among the beauties and mysteries of the earth are never alone or weary of life.” — Rachel Carson

“All that we are is the result of what we have thought.” — Buddha