Details about the HPO era 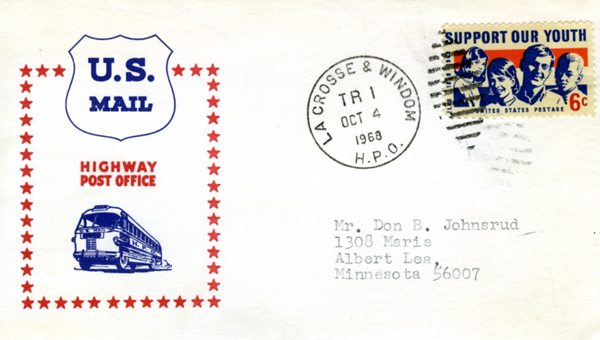 This envelope and its postmark became a special memento for Donald B. Johnsrud because it’s based on the last day of operations for the HPO from La Crosse, Wis., through Albert Lea to Windom. In reality, Johnsrud mailed this letter to himself. He worked on this HPO route during a part of his 30-year career with the nation’s postal service. -- Photos courtesy Eva Johnsrud

More details about the HPO era

Not long ago a Tribune column was based on the use of the Railway Post Office (RPO) and Highway Post Office (HPO) to help transport and distribute the U.S. mail around the nation.

This column resulted in Eva Johnsrud of Albert Lea contacting the Tribune with more information, plus photos, based on this phase of life about a half century ago. Her late husband, Donald B. Johnsrud, worked for the postal service for 30 years. And during those years he was part of both the RPO and HPO. The latter was also known by the nickname of “hypo.” 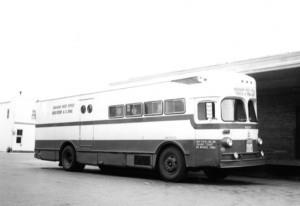 About five decades ago a large Highway Post Office (HPO), similar to a bus or recreational vehicle, could be seen on area roadways. A vehicle like this was used to transport the nation’s mail between various locations. At least four HPOs worked out of Albert Lea in the 1950s and ’60s.

Johnsrud graduated from Albert Lea High School in 1948 and served four years in the U.S. Air Force. He then worked at various jobs and qualified in 1955 for a position with the Postal Transportation Service in St. Paul.

For two years he was assigned to work in RPO mail cars on passenger and fast freight trains between the Twin Cities and Des Moines, Iowa, Omaha, Neb., and Chicago, Ill. From time to time he would pass through Albert Lea on Minneapolis and St. Louis Railroad and Chicago, Rock Island and Pacific Railroad trains.

In 1957, he and his family moved back to Albert Lea and Johnsrud made a switch from the fast fading RPO method of moving the mail to the newer HPO system.

An article in the Sept. 26, 1954, issue of the Tribune featured the first HPO in Minnesota that ran on a route from Albert Lea to Tama, Iowa. There’s no indication that Johnsrud ever worked on this HPO. (It may have ceased operations by 1957.)

However, by 1957, there were three more HPO routes going through or originating in the city. One was based on a Minneapolis to Des Moines route, another route ran from Windom to La Crosse, Wis., and a third ran from Albert Lea to La Crosse.. On all three HPO routes the mail was “sorted on the move.”

Up to 1968, Johnsrud worked on all three of these HPO routes. 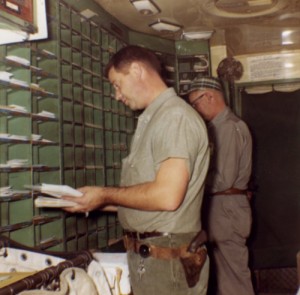 A little known fact about the postal personnel assigned to duty on the Highway Post Office (HPO) vehicles is that they were armed with pistols. Proof of this can be seen with a 1966 photo of Donald B. Johnsrud of Albert Lea sorting mail in a HPO.

In early October 1968, the decision was made to discontinue these three HPO routes. Johnsrud then became a city substitute mail carrier, window clerk, mail sorter, the Albert Lea’s Superintendent of Mails, assistant postmaster (a title later changed to Superintendent of Postal Operations) and retired at the end of June 1985. He died on June 30, 2003.

According to the National Postal Museum, the concept of sorting and transporting the U.S. mail in red, white and blue bus-like vehicles started in February 1941 on a route from Washington, D.C., to Harrisonburg, Va. This new method of moving the mail was soon delayed by World War II.

In the late 1940s the HPO concept started to replace the RPO system. In time, the nation had about 410 of these routes. Then sectional center mail processing (based on the zip code system) and high-speed sorting resulted in the gradual elimination of the HPO vehicles.

The nation’s last HPO was the Cincinnati-Cleveland, Ohio, route which ended on June 30, 1974.