Memorial services for Elwood Clive Guanella, age 84, of Alden will be held at 10:30 a.m. Monday at Bayview/Freeborn Funeral Chapel. The Rev. Gregory Ofsdahl will officiate.  Interment will be at the Alden Cemetery with military honors accorded by Freeborn County area veteran’s organizations. Visitation will be one hour prior to the service. To sign the guest book, go to www.bayviewfuneral.com. 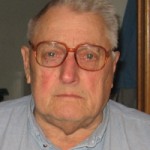 Elwood Clive Meyer was born July 7, 1926, to Elmer and Elvira Meyer in Echo. After his mother’s death in 1932, his aunt Edna and her husband Ira Guanella, adopted him and his sister Patricia. His youngest sister, Janis, was adopted by his father’s sister Burma, and husband Eugene Winkler. Elwood grew up in the Edina area and attended West High school in Minneapolis. In October of his senior year he was drafted into the service and requested to be in the United States Marines. Elwood was an old-fashioned patriot who proudly believed in duty, honor and country and was proud to have served in the Marines if only for a short time. Elwood served in the 4th Marines regiment of the 6th division.  His outfit had a 110 percent casualty rate at Okinawa where Elwood suffered a serious injury, which, he was awarded the Purple Heart for. His unit was also awarded the Presidential Unit Citation and a Navy Unit Citation for their service. Elwood was also involved in the occupation of Japan for ten months after the war ended. He attended Mankato State College and graduated with jonors with majors in math and physics in less than three years. In 1948 he was united in marriage to Alvina Owens in Lake Crystal.  Elwood worked for the Minnesota Mining Company for three years and then decided to go into teaching. He taught for a year and then became a high school principal. He was principal at the Brownton Public Schools and superintendent at the Freeborn Schools each for three years. After a year off to attend the U of M for administration graduate work, he became the superintendent of the Alden Schools and remained there for 22 years. While there he also served on the Minnesota State High School League Committee and District Committee. Elwood was a very active member of the Alden Community. He helped form the Alden Area Development Corp. and served as president for many years. He also served on the Alden Township board and was involved in starting the Oakview Golf Course serving on that board as well. Elwood was also proud of the fact he was asked to be the business manager of Albert Lea Schools and was also asked to run for the state legislature by the Republican Party of Freeborn County. Elwood was a loving husband and father and felt very strongly about the benefits of raising a family in a small town environment. Elwood was very grateful to God for his life partner Alvina and was extremely proud of his sons and grandsons.

Elwood was preceded in death by parents; step-parents; and sister, Patricia.