Galen Howard Evenson, age 93, of Freeborn, died Thursday, Aug. 12, 2010, at Parkview Care Center in Wells. Funeral services will be held Monday at 10:30 a.m. at Freeborn Congregational United Church of Christ in Freeborn. Visitation will be Sunday, Aug. 15, 2010, from 3 to 5 p.m. at Bruss-Heitner Funeral Home in Wells, and will continue one hour prior to the service at the church on Monday. The Rev. Cherie Daniel is officiating and burial will be in Freeborn Cemetery at a later date. Bruss-Heitner Funeral Home in Wells is assisting the family with arrangements. 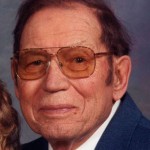 He was preceded in death by his sister Charlotte; brothers, Irvin and Clair; a sister and brother, Margaret and Marvin in infancy.