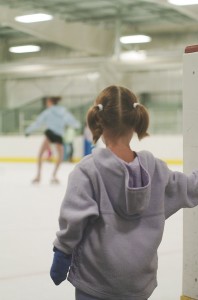 When Maddie VanBeek laced up her skates for the first time 11 months ago, she began following in the footsteps of her mother, Jennifer.

Jennifer skated in the Albert Lea Figure Skating Club from ages 5 to 15, until 1987, but never asked or pressured her daughter to join.

“Since my mom was a figure skater I saw the skates and everything,” Maddie said. “I thought that since I really love rollerblading it’s got to be the same on ice.”

Maddie, 11, and Jennifer are now able to share the same passion because of the dedication of the ALFSC, which is celebrating their 50th year as an organization, now until their show in March.

The ALFSC currently has around 50 girls and one boy skater. Most start when their five or six years old and skate through high school.

Skaters start in U.S. Figure Skating Basic Skills and must pass through eight levels, learning first how to stand on the ice.

Once they’ve mastered the basics, skaters learn crossovers, swizzles, turns and finally one foot spins and once they’ve passed all eight, move to Free Skate and another eight levels.

That’s where Maddie is, working on jumps and spins.

Maddie joined the ALFSC at 10 years old, later than many of the girls already in the club.

As a result, she found herself as the tallest skater in a group full of beginners.

But that didn’t last long.

“Her level increased so quickly that she caught up to girls her own age in now time,” Jennifer said. “I didn’t want to be the and stand out so I pushed myself to get better, quicker,” Maddie added. “I really wanted to be with girls my own age.”

She started slow, having trouble learning how to stop and at one point fell and slid into the boards, making such a loud noise that she was embarrassed.

Now, she’s teaching her younger brother how to stop and is working hard toward earning a spot in the figure skating show.

“I need to learn the one foot spin and work on perfecting the jumps,” Maddie said. “I just like to be out there, it doesn’t really matter if there is a show.”

The ALFSC’s season runs from September to August, and Maddie skates about three times a week year-round.

March’s figure skating show’s theme will be based around the club’s 50th anniversary. It will feature solos, duets and quartets, and skaters are grouped based on their skill level.

While Maddie is becoming an excellent skater, she has no plans of playing hockey. She just loves being on the ice alone.