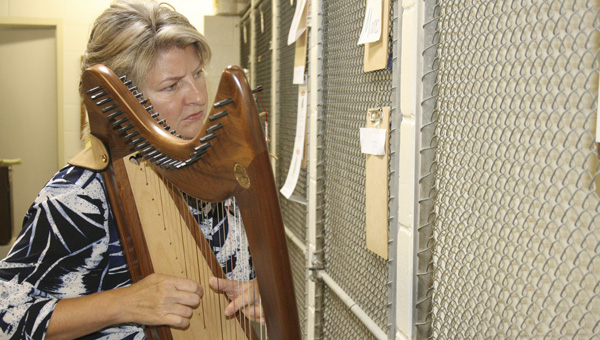 Slowly walking down the aisles of the Freeborn County Humane Society shelter earlier this month, Rachel Christensen looked intently into each of the cat cages.

A certified therapeutic harp practitioner, Christensen, an Albert Lean, strummed the chords of a harp strapped to her body.

As a soft melody and a sense of peace exuded from the harp, the cats — one by one — walked up to the front of their cages or laid back on a cushion, resting. 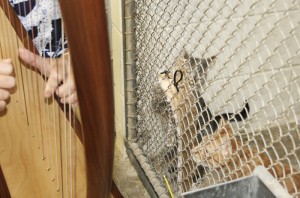 Two cats approach the front of their pens at the Freeborn County Humane Society as they listen to Rachel Christensen play the harp Aug. 4. -- Sarah Stultz/Albert Lea Tribune

Some stuck a paw through the bars of their cages to reach out to Christensen; others purred.

What had otherwise been an energetic, rambunctious morning at the shelter had turned into something quite the opposite.

“I never knew the effect that harp music could have on these cats,” said Dee Amberg, vice president of the Humane Society. “When we come in here in the morning, they are crazy. Rachel will come in and they all just go quiet. Even our crazy kittens, it calms them.” 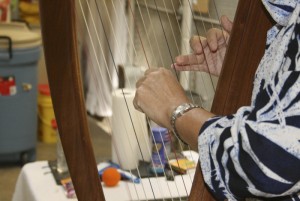 Christensen said she started coming to play for the cats in July after she heard that the Humane Society was one of several entities that lost money as a result of the theft allegations against former Freeborn County Commissioner Linda Tuttle. The criminal charges claim Tuttle took money through her title company, Albert Lea Abstract, to pay her supposed gambling addiction at an Iowa casino.

The Humane Society reportedly lost $150,000 from an anonymous donor that had been placed in escrow at Albert Lea Abstract. The money had been intended to be the springboard into a building expansion project; however, now, the project is on hold and the animals continue to live in close quarters. 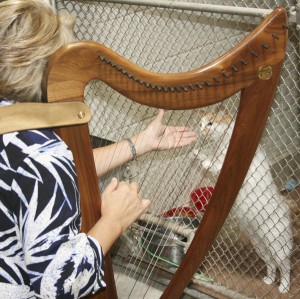 Rachel Christensen connects with a cat while playing her harp at the Freeborn County Humane Society earlier this month. -- Sarah Stultz/Albert Lea Tribune

“It moved me to want to come in and play,” Christensen said. “The animals, everyone, feels the stress.”

And the cats immediately responded.

“It truly is amazing, and I just think it’s such a wonderful gift,” Amberg added.

Christensen comes into the shelter once a week to play and stays until all the cats are calmed down, which is usually 45 minutes. The dogs have been too excited to participate.

She said with the cats she likes to make eye contact to make sure they’re settling in with her. She walks from one cage to the next, stopping to pause in front of each. 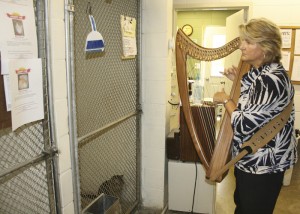 Rachel Christensen plays her harp at a visit earlier this month to the Freeborn County Humane Society. Christensen started coming to share her talents with the cats at the Humane Society after hearing that the money given from an anonymous donor for the organization's building expansion was tied up with allegations against former Freeborn County Commissioner Linda Tuttle. -- Sarah Stultz/Albert Lea Tribune

But it’s not only the cats that are benefiting from the service.

“It’s therapeutic for us, too,” Amberg said of herself and the other volunteers. “We truly, truly benefit from this.”

Aside from the shelter, Christensen also volunteers her harp-playing talents for the residents of Good Samaritan Society of Albert Lea. It has similar effects on the residents there, providing spiritual and emotional healing.

She began playing harp when she was growing up in Sioux Falls, S.D. When her mother married Herb Lund, the family moved to Albert Lea, and she continued to take lessons.