The funeral service for Irene M. Jorgenson, 96, former Ellendale and Albert Lea resident will be held at 11 a.m. Thursday at First Lutheran Church in Albert Lea. The Rev. Dan Baker will officiate. Interment will be in Hillcrest Cemetery. Visitation will be from 5 to 7 p.m. on Wednesday at Bonnerup Funeral Service, Albert Lea, and one hour before the service at the church. 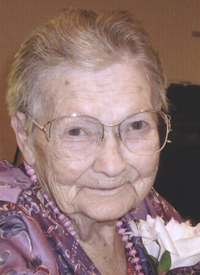 Irene was born on July 25, 1914, in Emmons, the daughter of Cornelius and Matilda “Tillie” (Olson) Qualey.

She attended school in Nevis and later graduated from Albert Lea High School. After high school she began working at Wilson and Co. and became a very integral part of the Teamsters Union. She was honored with the title of Miss Albert Lea which allowed her to travel all around the United States. As a young woman she enjoyed dancing, playing softball, basketball, was in a number of community theater plays, and played Hawaiian guitar on the radio.

She married Howard F. “Jurgy” Jorgenson on June 17, 1939, in Albert Lea. Early in WWII she worked as a welder on a big ship in California. When Jurgy got drafted they returned to Albert Lea and in 1950 they bought a farm near Ellendale, where they worked and continued to raise their family. She was active in the Farmers Union, sold Amway for more than 30 years and was an avid gardener.

The family has grateful hearts for the special tender loving care given by her friend and nurse Connie Boerger.

She was preceded in death by her parents; her husband, Howard, in 2007; great-grandson, Jacob; brothers: Harry, Chester, Spencer, Melvin and Lyle.

Mom, you sang to us, you told us stories, you cleaned, cooked, gardened and loved us unconditionally your entire life. For this we are so grateful. Who could want a better mom than that?