Funeral services for James M. Vangen of Albert Lea will be held at 10:30 a.m. Wednesday at the Grace Lutheran Church of Albert Lea. The Revs. Todd Walsh and Andrea Myers will officiate. Friends may call Tuesday evening from 5 until 7 p.m. at the Bonnerup Funeral Service and one hour prior to the service at the church. Interment will be in Ft. Snelling National Cemetery, Minneapolis. 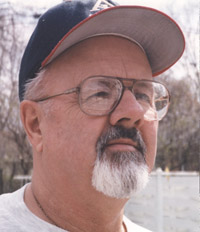 James was born June 10, 1936, the son of Minord H. and Harriet C. (Anderson) Vangen. He graduated from Ellendale High school and entered the U.S. Air Force serving in Alaska. He was united in marriage to Carolyn Richter on Sept. 29, 1990, at the Grace Lutheran Church where he had been a member for many years.

James was a dispatcher for over 37 years with Interstate Power (Alliant Energy). He was a member of the American Legion, Elks Club and the Eagles Club. Jim was a dedicated fan of Albert Lea sports especially hockey, baseball and football. He spent over 20 years coaching VFW baseball and hockey. His Swedish hockey exchanges spanned over a 13 year period. They united hundreds of families and provided education and global enrichment through a home sharing program. Lifelong friendships were made through these exchanges. He loved high school football and held his seats on the 50-yard line for a number of years. He taught his children how to golf, ice skate, throw, kick and hit a ball and was never more proud than watching his own children compete. And of course, he was a fan of the Vikings, the Twins, the Gophers, the Coyotes and Diamondbacks as well.

James is survived by his wife, Carolyn, of Albert Lea; children: Gregory Vangen of Edina, Bradley and his wife Nancy Vangen of Delaware, Ohio, Gayle and her husband John Jurik of Phoenix, Ariz.; and stepson, Jeffery, and his wife Chris Sanvick of Winona. Grandchildren include: Lars and Nels Vangen, Annika Jurik and step-grandsons Conner and Carsen Sanvick. One sister survives, Sharon (Herman) Marthalor of Cambridge.

James was preceded in death by his parents; brother, Gary Ross (Julie) Vangen; and a brother, David L. Vangen, in infancy.

Memorials preferred to youth sports. A special thank you to the staff at St. John’s for their care.