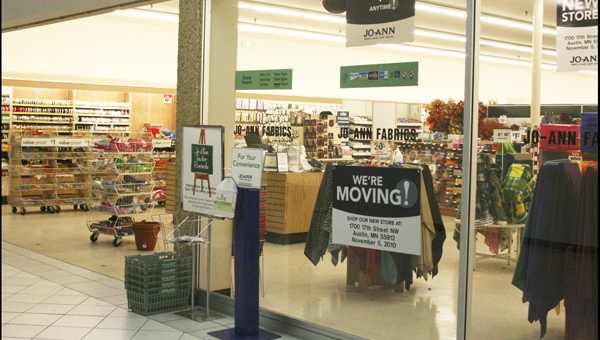 Signs hang all around the Jo-Ann Fabrics store in Albert Lea to notify customers that the store will move. When this craft store leaves Albert Lea, there will be fewer retail options for people who sew or make crafts. -- Kelli Lageson/Albert Lea Tribune

An anchor retail store in the Skyline Plaza on Main Street in Albert Lea will soon close and move to a new location in Austin.

Jo-Ann Fabrics & Crafts will open its new store on Nov. 5 on 17th Street in Austin, in the same shopping center as Target and Staples. A sign on the current store in Albert Lea said the new store will have more available space.

Part-owner of Skyline Plaza, Curtis Smith, said he wishes the store employees and owners nothing but the best. He also said he thought they were great clients and have been very good people to work with.

“We’re sad to see them go, but they’re going to a bigger location,” Smith said.

He said the owners will look to fill the space, but that they have no hard feelings toward Jo-Ann Fabrics for leaving. Smith also said he wanted to help the store in its transition, and he hoped its patrons would follow the store to Austin and continue to shop there. 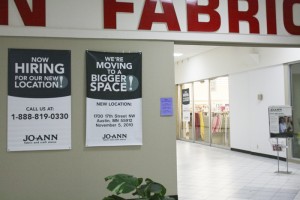 Signs outside the Jo-Ann Fabrics store in Skyline Plaza notify customers that the store will move soon. Calling the number on the sign for hiring information leads to a recorded message about an upcoming job fair at the Holiday Inn in Austin. -- Kelli Lageson/Albert Lea Tribune

Some customers aren’t exactly thrilled about the franchise moving to Austin because of the commute it will involve for them.

“I’m a quilter, and I need batting, fabric and thread,” Jo-Ann Fabrics shopper Karen Nelson said. “This store’s been here for a long time.”

She said it was disappointing that she’d have to commute to get the supplies she needs. Albert Lea-Freeborn County Chamber of Commerce Executive Director Randy Kehr said it’s a loss for the community.

“I don’t know that we have a replacement for them,” Kehr said. “Typically when you lose a business there’s someone else in town that also supplies those things, but in this case that doesn’t apply.”

He also said many Minnesotans are known for being handy with making things and not having a craft store will be difficult for them.

“A lot of women in our area have grown up sewing clothes for themselves or children and to not have those supplies readily available is a loss,” Kehr said.

Calico Hutch in Hayward has many supplies for quilters, including fabrics, but Jo-Ann Fabrics provides supplies for a wider array sewing and craft needs.

The district manager for the Albert Lea franchise of Jo-Ann Fabrics refused to comment, and calls to the corporate communications office were not returned. One of the signs outside the store advertises that the franchise is hiring and has a number available to call. Calling that number leads to a recorded message about a job fair on Aug. 31 and Sept. 1, from 8:30 a.m. to 6 p.m. The job fair will be held at the Holiday Inn in Austin.