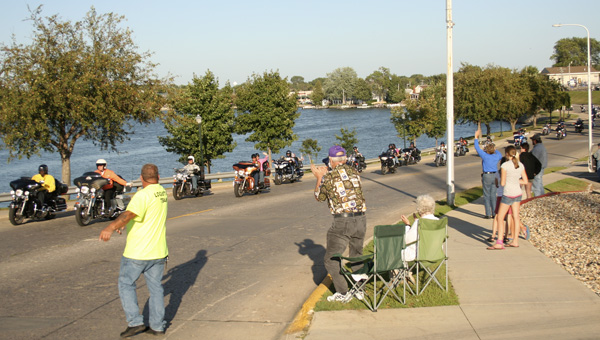 The Legacy Run, a group of American Legion members from the U.S. and other countries, rode through Albert Lea Tuesday night. The Albert Lea Post 56 was the only one chosen in Minnesota for the honor of hosting an overnight city.

“I don’t know that we’ve ever had this warm of a welcome anywhere,” Senior Road Capt. Dick Woods said of Albert Lea. “It’s a helluva good cause.”

He said people lined overpasses with flags and that it was nice to see support from the community. Freeborn County Sheriff Mark Harig and Salvation Army Capt. Jim Brickson escorted the riders to Albert Lea from Clear Lake, Iowa.

“To see how well the Legion planned the ride really makes you proud to be a part of a great cause,” Harig said.

He also said Brickson had just told him that it’s nice to see a group of heroes supporting the American Legion and soldiers and their families.

The riders rode in around 6:15 p.m. from Bethany, Mo., and attended the festivities in Albert Lea, including food and entertainment from the Community Band. Wednesday beginning at 8 a.m. they will ride on to Stevens Point, Wis.

The purpose of the ride is to provide scholarships to children of soldiers who have lost their lives since Sept. 11. At the last count about 300 people rode to Albert Lea. John Eisterhold, a member of Albert Lea Post 56 for 15 years, said a lot of planning went into the event.

“I think it’s great that Albert Lea gets to host this,” Eisterhold said.

Billy Johnson, a member of Georgia Post 512, said the ride raises money for a good cause and helps take care of members of the military and their families.

“It’s nice to see the enthusiasm of the community,” Johnson said.

The 2010 Legacy Run started in Indianapolis, Ind., on Aug. 22 and will end in Milwaukee, Wis., on Aug. 26 for the American Legion’s 92nd National Convention. The ride will travel more than 1,400 miles over five days.

One rider, the only one from Colorado and from China’s Post 1, is a paid up for life member of the American Legion and was asked to ride along and write about the experience. He enjoys the amount of camaraderie and support from people along the ride.

The Legacy Run is organized by the American Legion and the American Legion Riders. The Riders are a motorcycle enthusiast association within the national Legion organization. There are about 106,000 members who are Legion Riders. One well-known chapter in the Midwest is the Patriot Guard, which protects funerals of fallen soldiers from protesters. It is the first time the 17-year ride has stopped or gone through Albert Lea. Albert Lea resident Lowell Olson said he liked that there was a good turnout at the event.

“I think it’s wonderful to see this,” Olson said.