Love and Theft hits their stride 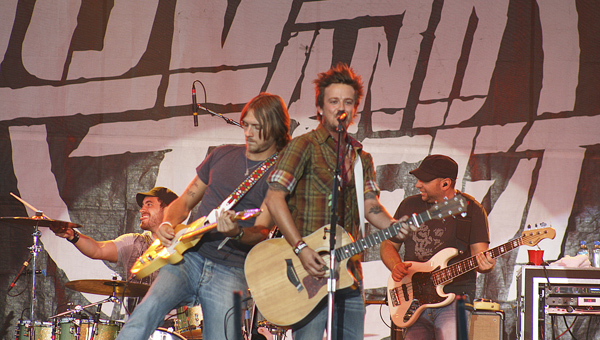 Love and Theft held their chart-topping single, “Runaway,” off until the end of their show Wednesday night at the Freeborn County Fair, keeping the audience engaged for nearly the entire hour and a half long concert.

The Grandstand wasn’t full, and it took a while for the crowd to get into the show, but Love and Theft played a mix of original songs and well-known covers, eventually bringing the audience to their feet.

Fiddler, Matt Thomas, was the first band member on the stage and received a loud applause. 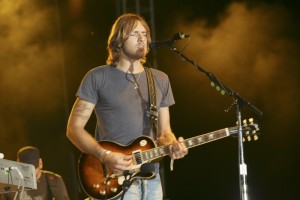 Love and Theft guitarist and Brian Bandas signs near the end of the band's concert Wednesday night at the Freeborn County Fair. -- Andrew Dyrdal

The audience was relatively quiet during the first song and the Martina McBride cover that followed, but Love and Theft reeled the audience back in with a cover of the Nitty Gritty Dirt Band’s “Fishin’ in the Dark.”

The audience sang along with, and clapped to, the contagious chorus and finally seemed focused on the music. Then, the seven-piece band, which features four guitars, a bass guitar, drums and a fiddle, slowed it down with “Me Without You,” “the last chance at a slow dance, or kiss on the lips,” according to the band’s Eric Gunderson.

Love and Theft then played a song they wrote for Bucky Covington and two unreleased tracks before beginning an impressive run of songs to end the concert with Tom Petty’s “Won’t Back Down.” 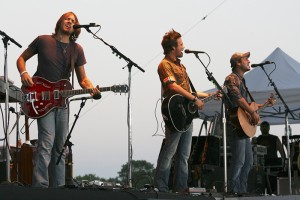 The Petty cover received the loudest audience reaction at that point in the concert as all of the band’s three vocalists took turns at their unique reductions of the song from Gunderson’s raw, rough vocals to Eric Bandas’ powerful voice that filled the fairgrounds.

As it became dark, Bandas moved from guitar to keys and Love and Theft played “Dancing in Circles,” and their debut album’s title track, “World Wide Open.”

The band didn’t talk much between songs and made their first reference to Minnesota near the end of their set.

“I’m the biggest Brett Favre fan of all-time,” Gunderson joked to the audience. “He’s playing, he text me earlier.”

To start the concert’s homestretch, which brought cheers and screams from the audience and sustained them like the fireworks finale of the Fourth of July, the band played Johnny Cash’s “Ring of Fire.”

The audience sang along as the band played through the song three times, introducing band members and taking turns at solos during the American classic’s bridge.

Love and Theft then ended the concert with their top 10 U.S. Billboard Hot Country song “Runaway,” with everybody in the Grandstand on their feet for the first time.”

The band didn’t play an encore as the lights came on minutes after the concert ended, but did sign autographs immediately after.

The country music band formed in Nashville, but with roots all over the United States. The show took a while to take off, but finished with a solid half hour of driving music.