Obert Alden Rust was born on a farm near Ferryville, Wis., on Oct. 8, 1915. He was the only child of Elmer Charles and Emma Augusta (Lee) Rust. He was baptized at the Freeman Lutheran Church, a congregation of the Norwegian Lutheran Synod. 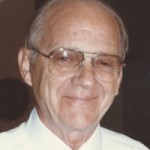 Obert grew up on the family farm. He attended the Lower Sugar Creek School and Gale Academy in Galesville, Wis. He stayed home for one year, in1933-34, during the Great Depression. He attended Gale College for one year before transferring to Luther College, Decorah, Iowa. He graduated from Luther College as an English major in 1938. Obert then studied theology at Luther Seminary in St. Paul, from 1938-42. He was ordained on July 5, 1942, at Freeman Lutheran Church.
Obert served parishes in St. Maries and Potlatch, Idaho, in 1942-43. In 1944 Obert entered the U.S. Army chaplaincy. He attended chaplain school at Harvard University and was assigned to chaplaincy with the Ordinance Battalion Headquarters in Grenada, Miss. He served in the China-Burma-India Theatre.
Obert and Florence Lillian Churness were married on June 21, 1944, before Obert left for overseas service. After chaplaincy, Obert accepted a call where he served the Luther Memorial Church in Gays Mills, Wis., from 1946-49. In 1949, Obert was called to Spring Grove, where he served Blackhammer, Riceford, and Trinity of Garness Lutheran Churches. In 1955, he accepted a call to Minnesota, where he served Oakland and Moscow Lutheran Churches for 20 years. From 1975 to 1980 Obert served as Associate Pastor at Estherville Lutheran Church in Estherville, Iowa.
Upon retirement in 1980, Obert and Florence moved to Albert Lea. During retirement Obert served as interim pastor and supply pastor in parishes in northern Iowa and southern Minnesota,  preaching in 59 churches in nine years. Florence and he made 17 trips to Mesa, Ariz., where they were active at St. Peter’s Lutheran Church. Obert ministered in pulpit and visitation roles. When Obert entered St. John’s Lutheran home of Albert Lea in 2001, he continued in ministry by leading residents in devotions and prayer, and by reading scripture and singing in Sunday worship.
Obert was a member of the Minnesota State China-Burma-India (CBI) Veterans’ Association. He was chaplain of CBI for five years, and also served as vice-commander from 1998-2000. Obert’s service to the community included long-standing memberships in the Kiwanis Golden K-1 of Albert Lea and the Freeborn County Historical Society.
Obert, 94, passed away on Aug. 3rd, 2010, at St. John’s Lutheran Home. The visitation at Bonnerup Funeral Home in Albert Lea will be held on Friday from 6 to 8 p.m. On Saturday Aug. 7, the 11 a.m. funeral service will be held at Oakland Lutheran Church of rural Albert Lea, with visitation prior to the service at 10 a.m. The committal service and burial will follow at the Oakland Lutheran Cemetery across the highway from the parsonage where Obert and Florence lived for 20 years.
Obert is survived by the children he dearly loved: his two daughters, three sons, grandchildren and great-grandchildren. Children are: Rachel (David) Carl of Rochester; Rusty Rust of Menomonie, Wis.; John (Addie) Rust of Clarks Grove; Lois (Steve) Malepsy of Litchfield; Eric (Brenda) Rust of Forest City, Iowa.
Obert’s grandchildren and great-grandchildren are: Michael Carl, Aaron (Amy) Rust; Travis (Kelly) Rust; Katie Rust; Brandon (Samantha) Cech; Barry (Katie) Cech; Jon Malepsy; David Malepsy; Brian Malepsy; Daniel Rust; Andrew Rust; Elly Rust and Henry Rust.
Also surviving are: Lila Storaasli of St. Paul; Mildred Churness and Edith Sandwick of Viroqua, Wis.; Amber Helgerson of LaCrosse, Wis., as well as many nieces, nephews and cousins.
He was preceded in death by his beloved wife, Florence, and his loving parents.
Memorials are preferred to the Oakland Lutheran Cemetery Association or the donor’s choice.