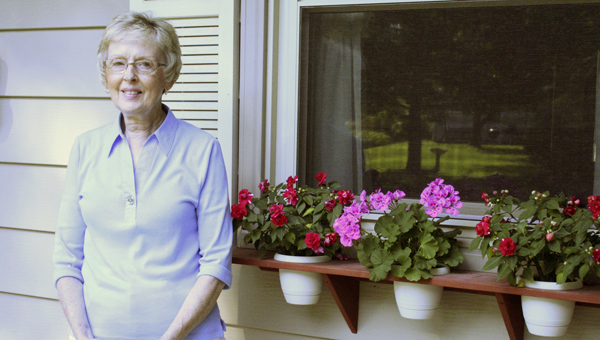 Dorothy Simonsen is one of two people who will be recognized with the 2010 Outstanding Senior Volunteer Award at the Freeborn County Fair this week. Simonsen is heavily involved with the Ecumenical Food Pantry and the Naeve Hospital Auxiliary. -- Sarah Stultz/Albert Lea Tribune

People in the community call her a tireless volunteer — a woman who is a joy to work with and who is respectful of others.

Whether Dorothy Simonsen, 72, is volunteering with the Ecumenical Food Pantry — where she and her husband spend a great deal of their time — with the Naeve Hospital Auxiliary, or in some other facet in the community, she is always putting forth her best effort.

And it’s all for the simple self-satisfaction of helping others, she said.

Simonsen will be recognized for this attitude and her volunteer work at 1 p.m. Wednesday at the Freeborn County Fair’s Outstanding Senior Volunteer Award program. She is one of two local recipients of the award and will also be recognized during the state Outstanding Senior Volunteer Award recognition program at the Minnesota State Fair on Senior Day, Sept. 2.

“What I believe makes Dorothy stand out as a volunteer is that she doesn’t just volunteer; she is a deeply committed volunteer,” said the Rev. Dwight Netzer of First Presbyterian Church, who is one of the people who nominated Simonsen for the award. “She doesn’t just serve; she shows leadership.”

Simonsen and her husband, Orv, have been heavily involved with the Ecumenical Food Pantry at First Presbyterian Church since 2002, after she retired.

There, she is the coordinator of supplies and orders and is a key part of providing nutritional foods to people in need. She volunteers an average of about 30 hours a month there.

“I have been deeply impressed with how dedicated, innovative and organized Dorothy is,” Netzer said. “Everybody I have ever talked to is quick to say how much they enjoy working with her.”

Likewise, Simonsen is heavily involved with the Naeve Hospital Auxiliary, volunteering between 12 and 25 hours a month through this organization. She also is an editor and distributor of the auxiliary’s newsletter.

“Dorothy is a self-starter, contributing to all groups she enters,” said Pat Stumme, Retired Senior Volunteer Program director. “Her quiet, efficient and competent approach wins co-workers and friends for the tasks at hand.”

Arlene Murray, who volunteers with Simonsen at the ALMC coffee shop, described Simonsen as an “efficient person,” who knows answers to many questions. The two were co-chairwomen of the coffee shop at ALMC for over two years.

“In the few years since her 70th birthday, Dorothy has logged 586 volunteer hours at the Ecumenical Food Shelf and an amazing 808 hours with the Albert Lea Medical Center’s Hospital Auxiliary,” Stumme added.

When asked about her reaction to being recognized with the Outstanding Senior Volunteer Award, Simonsen said she was “extremely shocked.”