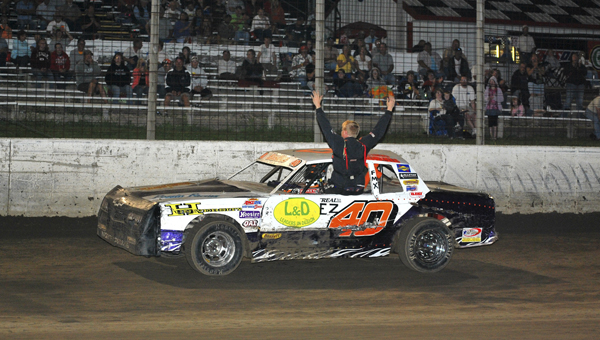 By Todd Narveson, For the Tribune

It was an absolutely picture perfect night for stock car racing at Chateau Raceway on Friday night. Several of the point leaders continued their quest for a track championship when they scored feature wins.

A.J. Zvorak, Brandon Davis, Chris Adams, Jason Cummins and Terry Blowers all added to their point leads after this week’s action. This week’s sponsor was RS Auto Rebuilders of Blooming Prairie. They had a huge number of prize giveaways for the lucky fans in attendance.

The Misgen Auto Parts Pure Stocks were first up for their 15-lap feature run. Keith Weber led until Dylan Nelson took over in turn two of the third lap. The top five shuffled up quite a bit throughout.

Nelson would pull away after a lap nine caution to win his fifth feature of the season, which leads the class. Adam Godeke had another solid run in second with Randy Rauen in third. Stacy Krohnberg and Jason Newkirk finished out the top five. 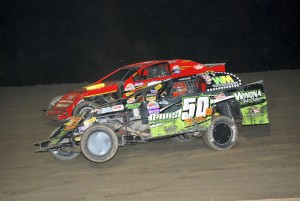 The No. 50 car sees the red No. 70 car close in Friday at Chateau Raceway in Lansing. -- Buck Monson/BuckMonsonPhoto.com

Tyler Peterson looked very strong early on in the RS Auto Rebuilders WISSOTA Street Stock feature. Peterson started on the pole and pulled away from A.J. Zvorak and Ross Spitzer.

Peterson’s luck soured dramatically on lap six when his right rear tire went flat and forced him to the pits. That handed the lead to Zvorak with Spitzer in tow and a caution bunched up the field on lap eight.

Spitzer slipped high in turn two on the restart and lost several positions. Ryan Goergen and Jason Barber both bolted by for second and third. Jesse Stahl and Dan Holland had a good tussle for the fourth spot.

Zvorak would cruise from there for his fourth win of 2010. Zvorak was behind the wheel of Matt Eustice’s car tonight. Zvorak’s car was heavily damaged last weekend and was not ready for Lansing. Eustice joined Zvorak in victory lane to help celebrate the big win.

Goergen finished in second with Barber’s great run in third. Holland slipped past Stahl late in the race and finished fourth.

Nineteen cars answered the bell for the Farm Boy BBQ WISSOTA Midwest Modified feature. It was a dandy when polesitter Troy Dahle vaulted out in front with Beau Lammers and Nathan Finley close behind.

Dahle and Lammers were close up front on lap three, and Finley was not too far behind. Lammers challenged low on lap four while Mike Paulson nabbed third. Greg Pfeifer Jr. was on the move and also got by Finley for fourth before the yellow flew on lap five.

After another caution on lap eight, things heated up at the front with Dahle under attack. Lammers slipped back a bit when Paulson and Pfeifer Jr. Shot past. Pfeifer Jr. then blew to second and brought Lammers back with him on lap nine.

Pfeifer Jr. stole the lead on lap 11 in turn four, but Dahle returned the favor in turn two. Meanwhile, Brandon Davis had charged to third from the ninth slot. Davis was now all over the top two and things were tight up front.

On lap 15, Pfeifer Jr. almost spun out in turn two, but kept going and everyone got on the binders. That allowed Dahle to stretch out the lead to a full straightaway. Lammers run ended on lap 16 when he stalled on the backstretch. That eliminated the huge lead that Dahle had just acquired.

On the restart, Dahle had his hands full with Davis. Davis tried the low side a couple of times, but Dahle was up to the task. With two to go, Davis again pulled even with the leader. Davis stole the lead in turn four when the white flag was being displayed.

Davis took it from there and swept his way to the tenth win of the season, twenty-ninth overall and seventh in a row. Dahle’s fine run ended in second, Pfeifer Jr. was third with Cody Gardner and Mike Paulson in the top five.

The Power 96/KQAQ 970AM IMCA Stock Cars were again light in numbers with six in attendance this week. Chris Adams and Dan Mackenthun had a good battle for the lead early on with Mackenthun in the lead.

Adams would challenge on lap five and took the point. Mackenthun would give it one last shot on laps 16 and 17 and got alongside Adams, but that was all. Adams won his fifth of the year with Mackenthun second and David Moriarty third.

Doug Hillson drove from row two and took the lead on lap one of the French’s Repair & Fabrication USRA Modified main. Jason Cummins scooted by Brian Shaw on lap six for second and then chased after Hillson. Todd Scharkey got by Shaw for third on lap nine.

Cummins worked the high groove to perfection and zoomed past Hillson on lap 10. From there Cummins checked out in the caution free event for his fourth win at Lansing this year. Hillson finished second with Scharkey, Shaw and Darwyn Karau in the top five.

In the S&S Auto Salvage Hornets, Casey Trom took home her fifth win of the season in the Junior class. Terry Blowers picked up his sixth win of the year in the Senior class.