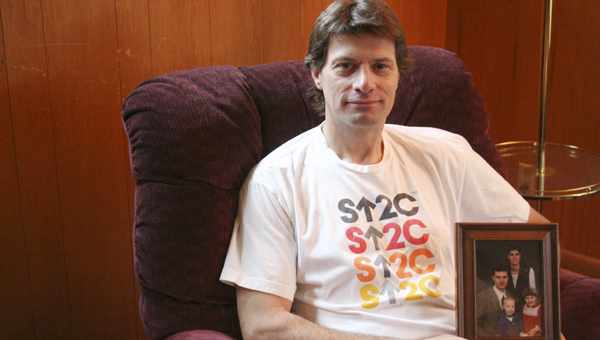 Greg Henderson sits in his home Monday with an old family photo of him, his wife and their two children. Henderson is the honorary caregiver for the 2010 Freeborn County Relay for Life. -- Sarah Stultz/Albert Lea Tribune

Editor’s Note: This is the first of a three-part series about this year’s Freeborn County Relay for Life honorary caregiver and survivors.

In the early months of 2008, Albert Lea resident Greg Henderson found out just what it meant to support his wife, Diane, through sickness and health.

On Nov. 11, 2007, Greg was celebrating Diane’s 40th birthday; three months later, his wife was diagnosed with a very rare and aggressive cancer.

“You have to be ready and willing to help,” said Greg, who has been chosen as this year’s honored caregiver for the Freeborn County Relay for Life. “And stay positive.”

Though it has been 1 1/2 years since Diane died from complications of metastatic neuroendocrine small cell carcinoma, Greg can recall her 10-month battle with cancer vividly.

He said Diane’s cancer was gastrointestinal in origin and was grade three of three. Doctors told them her cancer was not curable, only treatable.

Luckily, his employer at Hormel Foods in Austin had a family-first attitude, and a few of his co-workers even donated some of their hard-earned vacation hours so he could spend as much time as possible with his wife.

“I felt this was pretty amazing, considering I had only worked with these people for a few months,” Greg said.

He said Diane went through nine cycles of chemotherapy but had no radiation or surgeries because the cancer was already too advanced.

The chemotherapy medication also caused her to experience extreme pain in her hands and feet, a side effect known as chemotherapy-induced neuropathy.

Despite her discomfort, Diane wanted to try and continue to work — at least part time — at KQPR-FM radio, aka Power 96. She was very positive, he said.

He said because of the low counts, there were three different times where she developed a neutropenic fever and needed to be rushed by ambulance to the Mayo critical care unit of intensive care for a six or seven-day stay.

“During those 10 months, our family grew very close,” Greg said.

The couple and their children, Jessica and Joey, would watch many movies together, along with Twins and Vikings games.

“Words can’t express my gratitude for the support of all of our family members and friends,” Greg said.

He also thanked Crossroads Community Hospice and the Rev. Todd Walsh of Grace Lutheran Church for their help as well.

“Diane’s positive attitude throughout her entire cancer battle made it not only easier to be her caregiver, but made it my true honor,” Greg said.

Relay for Life Chairwoman Vicki Manges said she and fellow Relay for Life leader Nikki Schumaker worked with Diane at Power 96 and saw firsthand the love and compassion that Greg showed his wife.

Greg said he is learning more about the Relay for Life and is excited to be this year’s honored caregiver. He already has some fundraising ideas in mind for next year.

What’s next: Find out about honorary survivor Peggy Brech.