Richard Duane Engelby, 68, of Kiester, died Monday, Aug. 9, 2010, at St. Marys Hospital in Rochester. Funeral services will be held Friday at 11 a.m. at Our Saviors Lutheran Church in Kiester. Visitation will be Thursday from 5 to 7 p.m. at Bruss-Heitner Funeral Home in Wells, and will continue one hour prior to the service at the church on Friday. The Rev. Dick Steffen is officiating and burial will be in Bethel Lutheran Cemetery, Vinje, Iowa. Bruss-Heitner Funeral Home in Wells is assisting the family with arrangements. 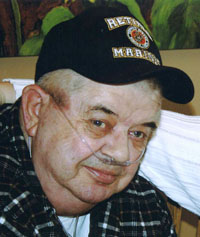 Richard was born May 3, 1942, in Albert Lea, the son of Alvin and Mabel (Engebretson) Engelby. He was raised in Vinje, Iowa, and graduated from Lake Mills High School in 1960. After graduation, he entered into the Marine Corps. On Dec. 28, 1968, he married Sheryl Steven at Our Savior’s Lutheran Church in Kiester. Richard retired from the Marine Corps after 20 years of service and went to work for NCR Corporation in Dallas, Texas, for two years. He then taught school for seven years at the Great Lakes Naval Air Station. He worked for Commonwealth Edison Power Plant for 9 1/2 years before moving to Kiester in 1998. After the move, he worked for Fleetguard briefly, and at Winnebago, retiring in May of 2002. Richard enjoyed reading, collecting coins and guns. Most of all he enjoyed spending time with his grandchildren.

He was preceded in death by his son, Eric; his parents; his brother, Don; and his mother-in-law, Sophie Steven.