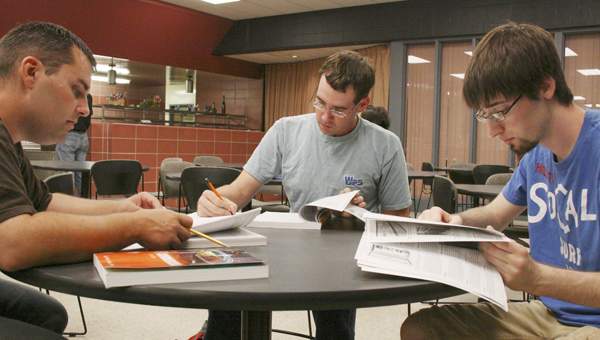 From left, Chad Christensen, David Braun and Dan Bartelt on Monday study books from their new classes at Riverland Community College in Albert Lea. Monday was the first day of a new semester for students at the college. -- Sarah Stultz/Albert Lea Tribune

After what seemed like a short summer, more than 2,500 Riverland Community College students began a new semester of classes Monday.

With the goal of graduation in mind, many said they have made college a priority not merely to further their education but ultimately to end up with a good job and to provide for themselves and their families.

Though Monday was the first day of classes, many students already could be seen in the halls and cafeteria studying their books. Others were busy reconnecting with friends. 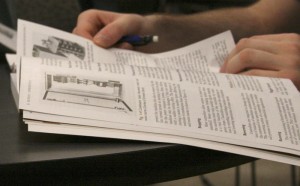 Melissa Bartel, 24, of Stewartville, said she was beginning her third semester at Riverland to become a medical administrative assistant. She drives 45 to 50 minutes each day that she has class because she wants to have a career, instead of a “dead-end” job.

Shelly Christianson, of Austin, had a similar story.

Christianson said she has three children — twins who are 7 and a 5-year-old.

“A lot of it is to help make a better life for them,” she said of her reasons for attending college.

She noted she thinks her most challenging class of the semester will be a course on diseases and conditions. She is seeking to be trained as a medical secretary and is taking classes on medical transcription, principles of bookkeeping, medical office procedures and skill building.

Riverland Communications Director James Douglass said as of Friday there were 2,745 students enrolled at the college for the fall 2010 semester. Last year, around the same time, enrollment was at 2,609. This is a preliminary increase of 136 students. 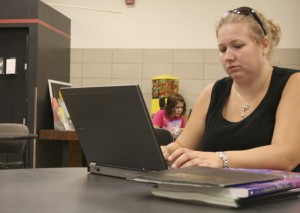 Shelly Christianson, of Austin, works on her computer Monday during the first day of classes at Riverland Community College in Albert Lea. Christianson said she is studying to become a medical secretary so she can provide a better life for her children. -- Sarah Stultz/Albert Lea Tribune

“The beginning of the semester is always an exciting time for Riverland as our faculty and students return,” Douglass said. “Preliminary numbers show an increase; however, it is difficult to determine any actual numbers or the number of credits sold until later in the semester.”

He said the Minnesota State Colleges and Universities public affairs office will release official enrollment figures in October. This is the 70th academic year for Riverland.

Factors that cause enrollment to fluctuate in the early weeks of a semester include the following:

Students have an option to add or drop classes during the first week of school.

A state payment policy will drop students for not making arrangements to pay their tuition.

Concurrent enrollment (college in high school) will not be determined until classes begin at area high schools.

Douglass said as of Friday, there were waiting lists in the auto service, industrial maintenance, massage therapist, nursing, radiography, welding and wind programs.

There were 345 students on waiting lists for 125 courses.

Classes are in high demand, especially for people who have been laid off or who have had no success finding a job.

One student like this is Terri Anderson, of Blooming Prairie, who is taking 19 credits after being laid off more than a year ago.

“I just hope there’s something when I’m done,” Anderson said.

She said she previously worked for a doctor for 14 years, but now she can’t get back into the profession as a medical administrative assistant without having specified training.

She noted she is grateful to her unemployment compensation, which is helping to get her through college financially.