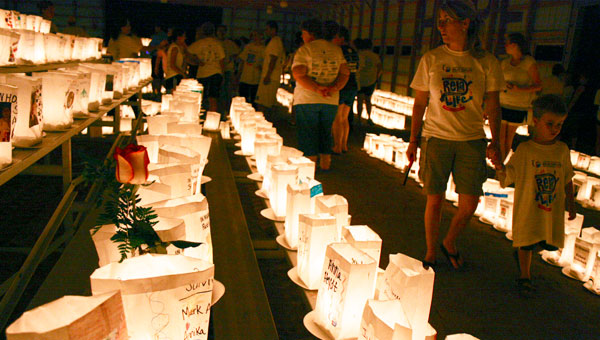 Sarah Stultz/Albert Lea Tribune Freeborn County Relay for Life participants and other members of the community walk through the luminaria made for cancer fighters and survivors after the bags were lit Friday at the Freeborn County Fairgrounds. -- Sarah Stultz

Hot, humid weather and threats of severe storms couldn’t keep hundreds of area residents from making a statement Friday and Saturday in the fight against cancer. 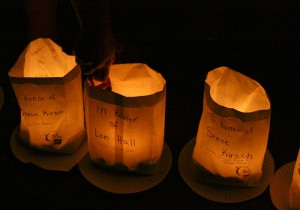 A luminaria, created in honor of Lon Hall, is lit Friday night during the luminary ceremony of the Relay for Life.

During what was the eighth annual Freeborn County Relay for Life, people from all walks of life bore down on the Freeborn County Fairgrounds for 12 hours to honor their friends and loved ones who have overcome or are still fighting the disease. 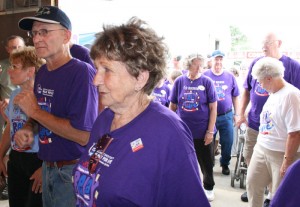 It was also a solemn opportunity to remember those who have died from their battle with cancer.

“I think it’s very moving to see the many cancer survivors,” said Judy Kropp, a member of the Relay for Life committee. They’re of all ages.”

Freeborn County Relay for Life Chairwoman Vicki Manges said as of Saturday morning county residents had raised about $129,000 for the relay, which is the signature event of the American Cancer Society.

“For one night we share the same vision,” Manges said.

Unified under a common cause, it was clear the night meant a lot to many.

Kropp said her oldest son, Michael, helped start Relay for Life in the community eight years ago; now, it has a more personal meaning as he is battling a brain tumor.

“It hits close to home sometimes,” she said. 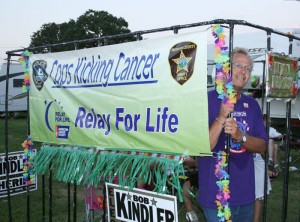 Larry Seltun waits his time in “jail” at the Cops Kicking Cancer campsite on Friday at the 2010 Freeborn County Relay for Life at the Freeborn County Fairgrounds. The team fundraised money for the relay by paying money to have someone handcuffed and placed in the makeshift jail. To get out of the jail, people had to post a bail of $10.

Kropp noted that her son is doing well and is undergoing oral chemotherapy treatments.

“We’re hoping,” she said. “We’ve got people praying for him all over the country.”

Her story was just one of hundreds that were being conversed at the fairgrounds Friday and Saturday.

With threats of rain earlier in the week, organizers moved the various events of the night indoors, but other than the heat and crowded conditions during the opening ceremonies, people didn’t seem to mind.

In fact, Manges said, 90 percent of the 68 participating teams said they actually liked the new setup better for the campsites because people were closer together.

“Everything just kind of fell into place,” Manges said. “You have to envision the best and make it what you want it to be.” 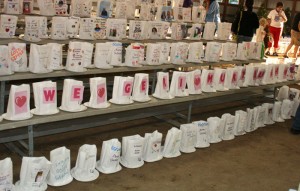 Just a few of the many luminaria at the Relay for Life on Friday night.

There was also a silent auction and live entertainment.

Cancer fighters and survivors took their typical survivor lap through the Swine Building and then at about dusk, luminaria were lit, starting in a pathway outside and then going inside at the North Pavilion.

For the remainder of the night, people socialized and fundraised.

Larry Seltun, who was put in a makeshift jail for the Cops Kicking Cancer team, said he enjoys the relay because “it brings everybody together for a cause.”

Seltun had cancer about 1 1/2 years ago.

Manges said the relay is more than just a fundraising event; it’s a night where the strength and determination of cancer survivors inspires the whole community.

Charlene Becker said she always puts out a luminary for her father who died at age 53. Her sister-in-law also had cancer. 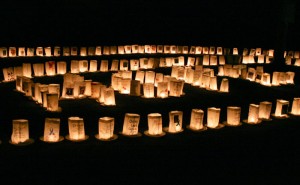 The luminaria at the 2010 Freeborn County Relay for Life spelled out the word “hope” during a part of the walkway.

“This is a really big deal,” she said.

Relay organizers have until Aug. 31 to collect remaining funds for this year’s relay goal of about $134,000.