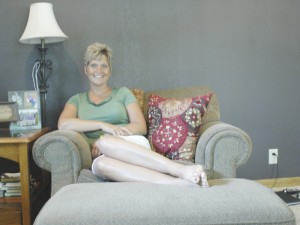 Coach used to beating the odds

On her 23rd birthday, Jill Johnson was diagnosed with stage-four Non-Hodgkin lymphoma and given a 20 percent chance to live.

Four years later, she was told that as a result of chemotherapy, she was infertile and would never have children. The next summer, she gave birth to her son, Luke.

Johnson’s path to marriage and motherhood was anything but easy.

After the grim diagnosis, the former Wisconsin State Diving Coach of the Year was given a trial regimen of chemotherapy that was double dosed.

Johnson slept the entire next week.

“It was really hard to do but you just do it,” said Johnson, of her struggle with chemotherapy. “You fight like hell.”

Johnson initially went to the hospital with a deep cough and had trouble swallowing. Doctors found a tumor the size of an orange pushing on her esophagus and tumors in her lungs. They were jelly-like masses and couldn’t be surgically removed.

Johnson described it as the worst possible scenario.

Johnson was diagnosed on December 21, 1994, and underwent treatment until the following July. The chemotherapy began destroying her body, even landing her in a wheelchair.

“You hurt,” said Johnson, of chemo treatments. “It kills everything.”

The chemotherapy began breaking down her stomach lining and the bones in her legs. She started to look different, too.

“It’s hard to be the one that everyone is looking at,” Johnson said. “But when they look at you, they’re supporting you, not like you’re strange. It’s hard for cancer patients to remember that.”

Although the chemotherapy made her sick and unable to walk, it worked, and Johnson’s cancer went into remission on Sep. 18, 1995.

She credits her resilience to being an athlete.

“Having my body strong and being athletic really helped me,” Johnson said. “Having that mentality and drive, I felt like I could (survive).”

But Johnson’s struggle with a numbers game wasn’t over.

After beating the 20 percent odds the doctors gave her years earlier, Johnson’s gynecologist gave her a new prognosis: a zero percent chance of getting pregnant.

Johnson’s chemotherapy treatments had made her sterile and in June 1998 a fertility specialist gave her three options: receive a donor egg, adopt or not have children.

“I was feeling really strange,” she said. “I thought, ‘I swear I’m pregnant.’”

Johnson took a pregnancy test. It came back positive, but she went to the hospital because she thought it might just be her hormones acting up.

During the ultrasound, doctors found a beating heart. It was July 1999 and she was nine weeks pregnant.

Johnson says it was a miracle.

“All the doctors were like, ‘oh my god!’” she said. “There must have been something hiding in there.”

Johnson’s son, Luke, is now 11 and she’s happily married to her husband, Jim.

After her struggle with cancer, coaching has taken on a whole new meaning.

“I think it’s just great to be able to (coach),” Johnson said, “to touch people’s lives. I become very emotionally involved and I want everyone to do their best. It’s fun to help kids reach their potential.”

When one of her athletes, a senior on the swim team, Mariah McGill was diagnosed with Hodgkin’s lymphoma at age 18, Johnson was able to reach out then, too.

“I told her to stay strong,” she said. “I tried to tell her to fight and let other people support her and told her a few things to expect.”

Johnson still tries to stay active. She coaches diving and can sometimes be seen on the golf course either golfing or supporting her husband.

She is the survivor chairwoman for the Relay for Life, too.