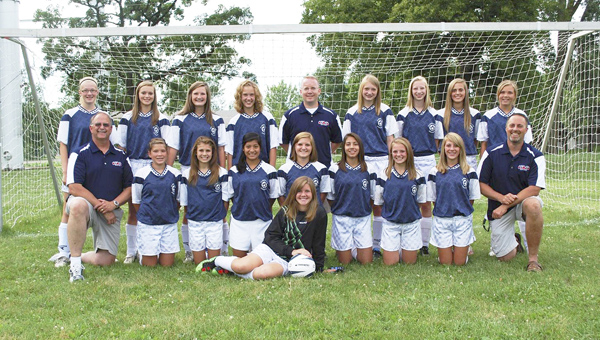 The Albert Lea Youth Soccer Association U-14 Classic 2 girls’ soccer team headed into a new and tougher division this summer, after winning the state title last summer as the U-13 Classic 3 Champions.

The team split the season with three wins, four losses and three ties.

They nearly evenly split their goal opportunities, scoring 17 goals and having 16 goals scored against them.

The team improved throughout the season by tying the No. 1 team Dakota Rev. 2-2 at the end of the season, having lost to the same team 6-0 earlier in the year.

The regular schedule brought greater challenges to the girls, forcing them to play up to their competition in the C-2 division.

The team easily won their first two games playing in the Fairmont tourney against older U-15 C-3 girls and tied in the third game when forced to play off positions, so again, as to challenge the Albert Lea players.

The team wishes to thank the community for supporting youth athletic programs such as boys’ and girls’ soccer. A special thanks to the ALYSA board members, local referees and groundskeepers for keeping the program running smoothly. The girls also wish to thank their coaches Darren Hanson, Troy Waldemar and Brad Niebuhr for all their volunteer time and effort this season.