Alden-Conger gears up for Homecoming celebrations

ALDEN — Knights spirit will be in full force on the streets of Alden on Friday for the annual Alden-Conger Homecoming parade.

The parade is a 40-plus year Homecoming tradition that gets stronger with time. 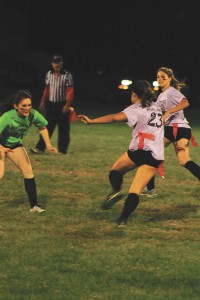 Samp said all of the grades at Alden-Conger schools, from kindergarten through the senior class, collaborated as early as the start of the school year to come up with a special theme for each of their floats.

According to Samp, float themes in this year’s parade will include the sixth graders’ “Ride Them to Victory” and the seventh graders’ “Stick It to Them.”

Students in each class secure an adult with a truck and hayrack, who will drive the class floats during the parade. Samp said students will also march alongside the floats.

While this week has been crunch time for students completing their floats, Samp said that some classes began constructing larger pieces of their floats well in advance.

The reason for the secrecy is that a group of community members come in and judge the floats. During halftime of the Homecoming football game Friday night, all of the floats will be driven around the football field and the winning float will be revealed.

“It’s definitely a team building experience,” said Samp. “As a class, they have to work together. The classes hold class meetings, elect officers and learn to communicate.”

The Alden-Conger Homecoming parade begins at 2:30 p.m. Friday at Hemminsen’s Garage and goes down Broadway Avenue.

Alden-Conger students have celebrated Homecoming all week with a variety of themed dress-up days and events.

Friday is also Spirit Day. Spirit Day includes a dodge ball exhibition with a showdown between seniors versus teachers and another between the senior football players and staff.

A pep fest and games follow, along with a pizza lunch and last-minute float preparation leading up the parade.

The Homecoming football game versus Truman begins at 7 p.m.