Beatles tribute is coming in December 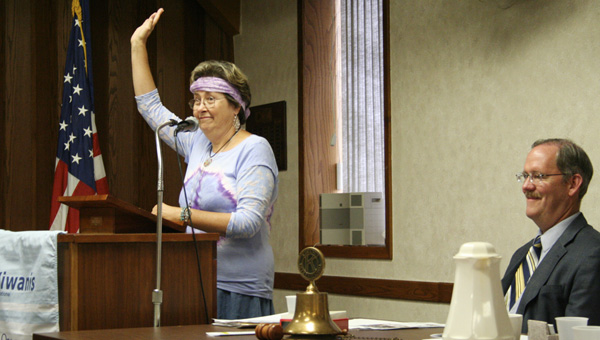 Karen Meyerson asks the members of the Noon Kiwanis Club if they could recall when they first heard the Beatles. Club President Tim Lenhart, right, raised his hand. -- Tim Engstrom/Albert Lea Tribune

It’s been a hard day’s night, and the Freeborn County Humane Society and Thorne Crest Retirement Community have been working like a dog.

The band is slated to perform Dec. 3 at the Albert Lea High School auditorium. The proceeds will be split between Freeborn County Humane Society and Thorne Crest Retirement Community.

News broke in June that the Humane Society had lost a $150,000 donation in escrow when Albert Lea Abstract Co. closed amid allegations of theft and racketeering. The money was to go toward an expansion of the animal shelter at Frank Hall Park.

“My feeling about losing the funds is from crisis comes opportunity,” Meyerson said.

Indeed, the anonymous donor of the $150,000 was upset at the loss, Meyerson said, but not at the society, which had placed the money in escrow on the advice of its lawyer.

However, she wanted people to know that no other Humane Society funds were lost. Any donations to the organization are secure, she said.

Shortly after the news of the loss, Callahan spoke with her husband, Kelly, about how the two organizations have the same mission.

Thorne Crest hopes to raise funds for barrier-free doors. Callahan knew about the band because she went to high school with its members. She approached Meyerson about the concert and splitting the proceeds.

Meyerson was squeamish about the idea. After the loss, the Humane Society intended to shy away from high-overhead fundraisers. Callahan agreed Thorne Crest would take the risk.

“Now I feel obligated to drum up the money,” Meyerson said.

The two organizations are looking to get sponsors for the event to offset expenses. The biggest cost is the band, which Callahan said already has cut its rate for them. Offsetting expenses with sponsorships would allow the ticket sales to be 100 percent for the fundraising goals.

American English has played in London before a crowd of 150,000, Callahan said. The band has been endorsed by former Beatles manager Sam Leach and Beatles bass player and singer Paul McCartney.

Meyerson, whose favorite Beatle is McCartney, said the Buckets on Broadway fundraiser was the biggest single-day success for the Humane Society, raising $18,000 — and with additional donations later that day the total grew to $23,000 — but there is a long way to go to make up for the loss.

Humane Society funds would go toward offsetting the daily cost of nurturing homeless animals and for rebuilding the organization’s funds.

“With the economic times being what they are, it’s even worse for animals,” Meyerson said.

She said the organization, in the future, also hopes to create a pet food bank, for families who might give up a pet because of the cost of feeding it. This could sway them to keep their pet.

No, the food shelf won’t seem like back in the U.S.S.R. but the recipients will know how lucky they are. Boy.

Yes, the society hopes to get by with a little help from its friends.

And, yes, this story could go on with Beatles puns, but it would be hard to carry that weight eight days a week down the long and winding road, goo goo g’joob.