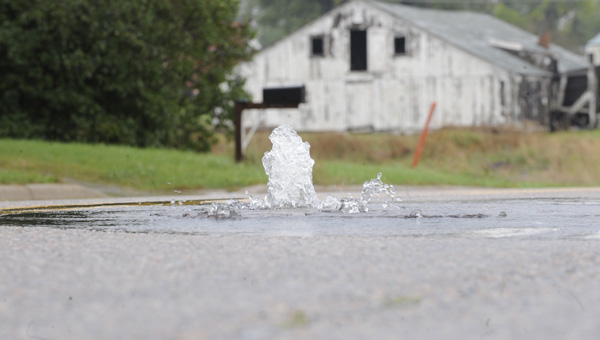 Water shoots up from a manhole cover on Eighth Avenue in Ellendale on Thursday. -- Tim Engstrom/Albert Lea Tribune

ELLENDALE — No river or creek runs through this city, but it is hilly, so water pools when there is a lot of rain.

Surface water formed streams Wednesday night and Thursday morning, which formed ponds inside the town, and after reaching the edges of the city, became new lakes.

City Administrator Steve Louks said — on Thursday morning — he had reports of about 9 inches of rain in Ellendale. It continued to rain into the afternoon, so the storm total has risen since. 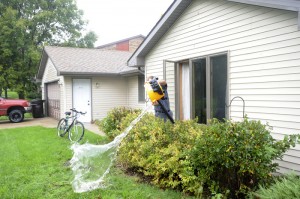 Kris Klinger dumps water Thursday in Ellendale from a shop vac he used to ensure no water came into his house through vents. -- Tim Engstrom/Albert Lea Tribune

He said many homes reported basement flooding. City Park was under water. Some houses even became islands surrounded by water. A big lake was in the field north of the United Methodist Church draining over the road to Whispering Oak Assisted Living Facility and into yards and ditches.

Another stream of water covered a block of Second Street, flowing south before crossing the yard of Kris Klinger and into the backyards of many homeowners, such as Amanda Beech and Ron Leak, where it formed a pond. The pond eventually drained beneath Eighth Avenue into a new lake on the south side of town.

Many of the homes had water in the basement, but one of the worst hit was Poke and Bunny Johnson on Second Street. The sewer backed up, too, and they had four feet of water and sewer in their basement.

Bunny said they had water and sewer in their basement as a result of a June storm and had to carry out six pickup loads of ruined junk.

The washer and dryer are on cinder blocks and the water Thursday was up to the dryer door, she said. 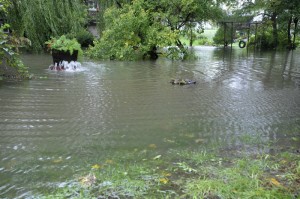 Water spouts from a manhole cover beneath a flowerpot in Ellendale on Thursday. A stream of water through the city collected into a pond in the backyards of Amanda Beech, Ron Leak and some other neighbors. -- Tim Engstrom/Albert Lea Tribune

The basement has no toilets; the previous homeowners had removed a toilet and a shower and left plugs to stop the holes.

When sewer backed up during the heavy rains, “they just popped right out.”

During the June storms, the plugs came out after the city pulled the power on a lift station, she said. This time, it seemed the amount of water was too much for the city pumps.

“The city’s storm sewer and sanitary sewer bleed into each other somehow,” Bunny said.

And she cannot pump the water out of the basement because that would contaminate the yard.

The sewer alarm was going off at neighbor Craig Budenske’s house. He said he had some water come in around the foundation but the sump pump was handling it. He said the water on Second Street will drain away once the city gets its pumps caught up.

Beech, who has lived in Ellendale for a dozen years, said she has never seen so much surface water through her yard. On Thursday morning, she kept sweeping away the water in her basement toward one end but gave up because it kept raining. She figured she would do it after the rain stopped.

“It’s coming in from all over,” Beech said.

The yard of Roger and Karen Swearingen was filled with sinkholes Thursday.

In June, they had water and sewer in their basement. Since then, Roger, the city maintenance man, installed a sewer outlet to relieve the issue. However, the yard had to be dug up, and with the rains Wednesday and Thursday, the soil compacted and sunk.

Karen said a crew was coming to remodel the basement on Saturday, but she was worried that might not be possible now.

More rain continued to fall Thursday afternoon, and the city’s fire department requested assistance from neighboring cities to help deal with the flooding.