Former Albert Lea City Manager Jim Norman made his first appearance in Freeborn County District Court on Wednesday on charges that he misused the city-issued credit card for personal purchases during his first few months in the position. 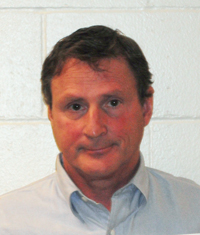 There was no discussion during the brief hearing regarding whether the case would be dismissed because of a request from the Albert Lea City Council.

Assistant Waseca County Attorney Brenda Miller, who is prosecuting the case for Freeborn County, said after the hearing she has still had no written or verbal contact with the city and said, even if she had, she would have still moved forward with prosecuting the case.

The issue of dismissing a case is sometimes motioned by defense lawyers during the next phase of hearings. Norman’s lawyer, Dean K. Adams of the Adams, Rizzi & Sween law firm in Austin, requested a default omnibus hearing for his client.

During the arraignment, Freeborn County District Court Judge John A. Chesterman read aloud Norman’s charges, which include the following:

The police investigation states Norman allegedly abused the city credit card for more than $2,300 in purchases for items such as a side-by-side refrigerator, groceries, women’s shoes and hotels.

Norman, who appeared nervous and embarrassed to be in court, was released on his promise to reappear at his next hearing, to obey the law and to not leave the state without prior court approval. After the hearing, he was photographed and fingerprinted in the Freeborn County jail.

Chesterman said if Norman wants to go out of Minnesota while searching for a new job, he needs to get prior approval.

Because Norman agreed to the conditions, he will not have to pay the $15,000 unconditional bail option.

Norman, who started full time as Albert Lea city manager on May 3, resigned Monday as part of a separation agreement between him and the City Council, which resulted because of the pending litigations. He had been on administrative paid leave since Aug. 27.

As part of the agreement, the city also agreed to pay Norman a lump sum equivalent to three months in severance and to request the criminal charges against Norman be dismissed.