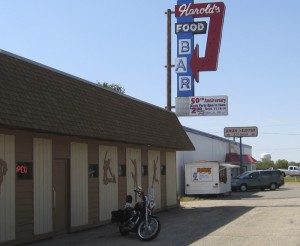 Darwin and Darrell Haroldson purchased the Harold’s Bar property at 1318 E. Main St. in September of 1960. The name Harold’s came from their last name Haroldson. At that time Wilson’s Company, a meat packing plant, just a mere block from the bar only had a day shift. Shortly after their purchase of the bar Wilson’s put on a second shift and business could not have been better.

The two of them decided to remodel the bar to accommodate more customers. Food was added and they expanded into the building next door for a restaurant. Having the bar complete with a full menu and weekend entertainment the business took off.

In 2003, Walgreen’s approached Harold’s Bar and wanted to purchase its half block. This was the only time the bar almost faded away. The deal fell through so in 2004 Dawin retired and sold his share of the business to Todd. Todd then closed the liquor store and focused on the bar and restaurant. Running three businesses was too difficult for one person. Harold’s Bar was known as the working man’s bar. This meant an uphill battle to turn it around and try to get a younger crowd with some remodeling, karaoke and drink specials. This was a creation of good hospitality, friendliness and paying attention to the customer. Giving the customer what they want and giving back to the community that gave to them. Harold’s Bar has not forgotten what got them to today, all the plants, companies in and around Albert Lea and all the good people who have frequented the bar for 50 years. Harold’s bar would like to say thank you to all the pool, softball, dart, volleyball, bowling, trap shooting, hockey and broom ball teams, past and present. Thank you Albert Lea for giving us the opportunity to serve you.

As thanks Harold’s Bar had a block party on the Sept. 17 through 19 from 8 p.m. to 12 a.m. each night to give back to the community that unselfishly gave to the Harold’s Bar family and made this a great 50 years.

Darwin can still be seen behind the bar helping Todd in the mornings. This is his business and always will be as he established it along with his brother 50 years ago on Sept. 16, 1960, and we here at Harold’s look forward to making new friends and hope to do this again at 75 years keeping it in the Haroldson family name.