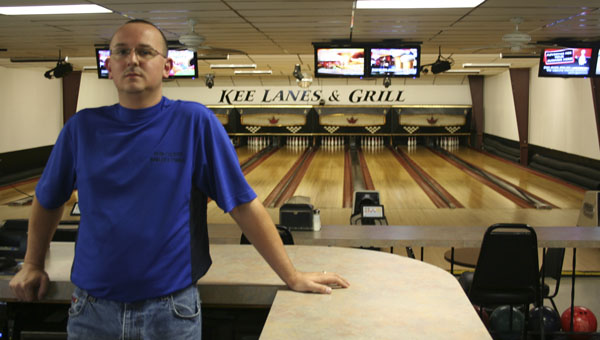 Kee Lanes & Grill owner Jason Oskerson poses for a photo at the counter of the bowling center. Oskerson is glad that Kiester residents and all bowlers in the area have a place to come bowl, eat and have fun. -- Kelli Lageson/Albert Lea Tribune

Jason Oskerson, 32, of Fairmont, bought Kee Lanes on Aug. 1. A grand opening celebration was held last weekend after renovations were completed. Oskerson, a longtime bowler, said he’s wanted to own a bowling center for quite some time.

“I’ve always had an interest in owning a center,” Oskerson said. 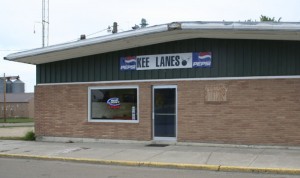 After purchasing the center, Oskerson got to work on restoring it. He put in a new heating and air conditioning system and had repairs done to the machines that set the pins.

While the center came with an automatic scoring system, Oskerson said it didn’t work well. He had it replaced and said it just made sense to make that a priority. He knows it can be frustrating for bowlers to deal with faulty equipment, and while no equipment is perfect he hopes the renovations will make bowling more fun.

“If things don’t work, you won’t come back,” Oskerson said.

The bowling center also has a restaurant, which residents will like because there are few other choices in Kiester. It also has a liquor license for 3.2 beer. Oskerson said his main goal is to have a place where the community can have some fun. He said bowling has been a hobby for him for many years. 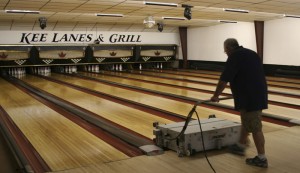 “I’ve been bowling ever since I can remember,” Oskerson said.

Oskerson actually won two tournaments at Kee Lanes in 1990. When customers didn’t believe him he went home and dug out two trophies that are now on the front counter to prove that he had been to the bowling center before purchasing it.

He said his next project will be to work on another area of the building off to the side of the bowling alley. He would like to make a sports-themed hang out area with TVs, but won’t start working on that project for a few months.

Oskerson currently just has one full-time employee, Joe Tepley, and said his family will help out with work as needed. He wants to have help from his family to keep the center family-oriented.

Oskerson said he’d be starting cosmic bowling in the near future with lights and music on Friday and Saturday nights. He also wants to work with area churches for activities.

“We could do overnight lock-ins or youth group things,” Oskerson said.

He’s also interested in working on birthday parties or package deals for those interested. He said he could make a package with unlimited food and bowling for a large party and said people can contact him with any questions. Oskerson would also like to encourage people to check out the Kee Lanes & Grill Facebook page.

The main project Oskerson is working on currently is establishing leagues. Leagues he’s starting include: