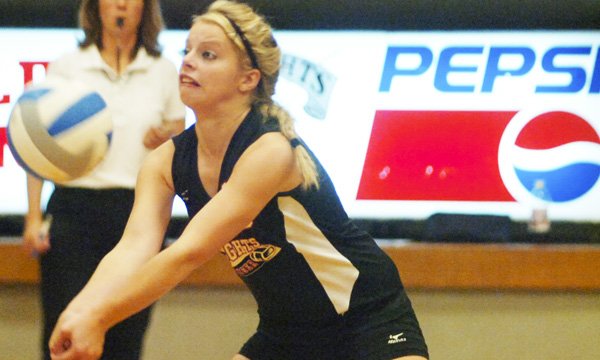 ALDEN- The Alden-Conger volleyball team looked to capture its first win of the season on Monday as it hosted Madelia.

The Knights found themselves down two games early but fought all the way back to win the match 3-2 in what was a back-and-forth game all the way through.

“The girls came out slow and weren’t playing their game,” Alden-Conger coach Sarah Attig said. “But they picked it up and they wanted it bad tonight.”

The Blackhawks came out firing early as it squeaked by the Knights 26-24 in the first game and then used some fine play from outside hitter Larissa Young to go up 2-0 over A-C.

“Monday games for us are tough,” Attig said. “We have a hard time coming off the weekend sometimes. We start slow and then tend to get into it. Thats the way we are. We’re young and that’s part of being young is learning from that experience of coming out and getting after them right away instead of starting off slow. That’s just part of being a young team right now.”

The Knights certainly got after over the next three games.

Alden-Conger came out in the third a changed team and won the game 25-18.

In the fourth set, the Knights and Blackhawks exchanged leads a couple of times. With the score tied at 26, it was clutch plays that allowed the Knights to win the game 28-26 and force a fifth set.

In the fifth set, Madelia jumped out to a 7-2 early lead and forced the Knights to use a timeout.

The lead changed hands four times in the final game before the Knights scored two straight points at the end to claim the game 16-14 and the match .

“Because our girls are so young, they tend to hold back on their hits a little bit,” Attig said. “When they get a little bit nervous they play it safe a lot. They need some encouragement to go down and hit it hard all the time. When the game gets going, they start to feel comfortable they start playing it. Their hits start to get a little bit harder and that’s kinda what we saw as the turnaround here tonight.”

While the hits were key for Alden-Conger, so was the play of sophomore setter Allison Songstad.

Songstad was all over the court for the Knights and totaled 21 assists on the night.

Along with Songstad, the Alden-Conger frontline also played a key role in the come from behind win.

Karina Skov, Ariel Keller and Taylor Martin all recorded seven kills a piece for the Knights and also had key blocks down the stretch for Alden-Conger.

Skov also went 19-for-28 from the service line with six aces and Taylor Martin finished 22-for-24 with four aces on the night.

Kelsey Behnke led the Knights with 17 digs, while Karina Skov had 12 digs and Hayley Knutson had 10 digs.

Alden-Conger plays again on Thursday in Alden against Maple River.