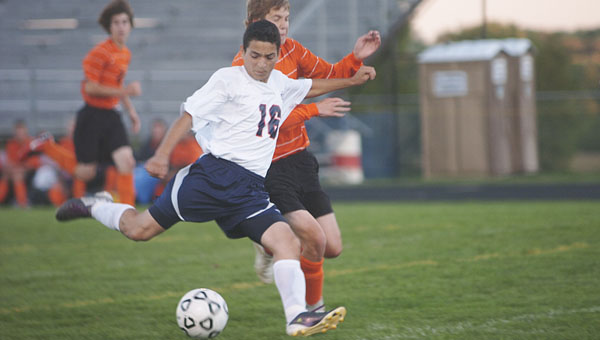 Albert Lea’s Julio Ambriz winds up to fire a shot at Winona goalkeeper Mark Blacklock during the first half of the Tigers game against the Winhawks at Hammer Field Tuesday. -- Andrew Dyrdal

The Tigers took a 1-0 lead to halftime Tuesday at home against Winona, but couldn’t control the ball in the second half, and fell 2-1.

“We were definitely more disciplined in our approach in the second half than we were against Waseca,” Albert Lea (0-2) head coach Elia Romano said. “We had problems transitioning from defense to attacking and were stuck in our defensive third quite a bit.” 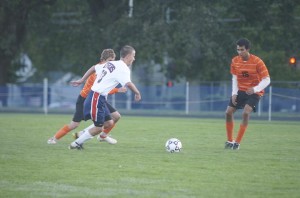 Alik Smed passed the ball backwards to allow his teammates to move up field and Sean Laurie played a ball into the box from 40 yards out. As the Winona goalkeeper misplayed the ball, Julio Ambriz was there to knock it into the back of the net.

“We had more quality scoring chances than Winona,” Romano said. “But they had more shots on goal.”

After Ambriz scored, the Tigers had trouble getting into the attacking third for the rest of the match.

While the Tigers were able to shut out the Winhawks during the first half, Winona was able to score on a free kick after the break, and scored again, minutes later, when a ball got behind the Tigers’ defense.

“That was one of only three times the ball got behind us all night,” Romano said. “Give them credit for taking advantage of it.”

The Tigers play again Thursday night as they host Mankato East at 7 p.m.