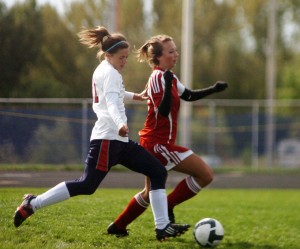 Taylor Friehl chips in a goal during the first half Saturday. -- Jon Thuer

After defeating Austin on Thursday, the Albert Lea girls’ soccer team looked to get another win on Saturday as it played Fairmont in the first round of the Albert Lea Invite.

“It was a situation where we had an advantage up front I believe,” Albert Lea coach Rick Barnhill said. “Ariel and Taylor brought a lot of pressure and we generated a high volume of shots”

This was the second straight game where Christensen and Friehl both had multiple goals for the Tigers.

“They have been consistent all year long,” Barnhill said. “They’re a good tandem. They work off each other really well. Combination plays is what we try to get from them. They’re pretty dynamic when they get the ball. They can turn, and they are fairly elusive up front. They have a good knack for finding the net.”

The Albert Lea offense as a whole put pressure on the Cardinals the entire game, as the Tigers totaled 37 shots on goal.

“A lot of that comes from the help of our defenders and our midfield,” Barnhill said. “We do a good job of laying balls back and circulating ball backs. Also, we switch the points of attack and change the field from side to side and then driving the ball up to the frontline.”

Along with the offense, the defense also did a great job in limiting the Cardinals chances. Fairmont had just nine shots on goal.

“The defense was well organized,” Barnhill said. “They took care of the ball and had good control of it. They put themselves in a position where they didn’t allow Fairmont to get behind us and kept everything in front. Our tackling was better than average.”

Albert Lea struck first as Ariel Christensen knocked home a goal with 24 minutes and 51 seconds left in the first half to give Albert Lea a 1-0 lead.

The Tigers then scored again just over three minutes later when Gretta Johnson powered a goal past the Fairmont goalkeeper with 21:19 left to give Albert Lea a 2-0 lead.

The Tigers weren’t done when Taylor Friehl netted her first goal with 15:01 left to give Albert Lea a 3-0 lead.

Then with 4:13 left, Ariel Christensen netted her second goal of the game to give the Tigers a 4-0 lead at Halftime.

In the second half, Albert Lea got on the board again when Taylor Friehl scored her second goal of the game to give Albert Lea a 5-0 lead.

Albert Lea played at 1 p.m. Saturday in the second-round of the Albert Lea Invite. Results were not known when this edition went to press.