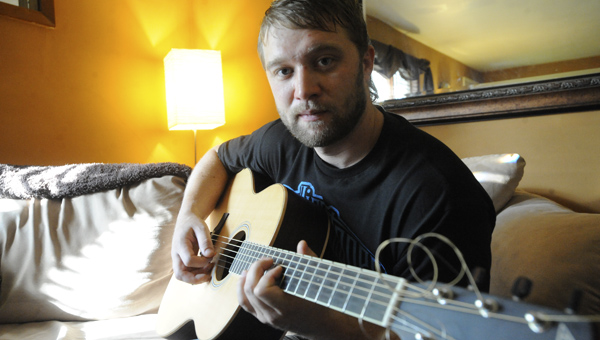 Tristan Sather plays his Larrivée acoustic guitar in his Albert Lea home. Larrivée is based in Victoria, British Columbia, Canada. It has a factory in that city and one in California. See this story and more like it in Southern Minnesota, Oct. 31. -- Tim Engstrom/Albert Lea Tribune

When Albert Lean Tristan Sather was 18 years old, his parents bought a guitar for his sister.

Sather said his sister never played the instrument so he decided to pick it up for himself.

He caught on pretty easily — having grown up in a musically inclined family — and learned how to play by watching other guitarists and simply listening by ear.

He’d had an interest in learning to play the guitar ever since his father took him to a Leo Kottke concert when he was 16. 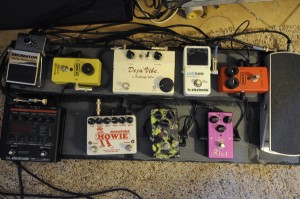 Stomp boxes decorate the floor near Tristan Sather’s amplifiers. He says he is getting a new amplifier that will reduce his need for boxes to create effects. See this story and more like it in Southern Minnesota, Oct. 31. -- Tim Engstrom/Albert Lea Tribune

Sather said he played the instrument on his own for two years and then joined his first band.

Over the years since he’s played in a series of bands including acoustic cover band Long Gone Daddy along with Emergency Broadcast Unit.

He’s also received an associate’s degree in both music performance and business.

Now, nine years later, on top of his day job at Qccp Inc. in Lake Mills, Iowa, Sather, 27, is one of two guitarists in up-and-coming live rock band Bad Monkey.

The band, made up of Sather, lead vocalist Seth Larson of Albert Lea, guitarist Clete Hering of Faribault, drummer Russ Wallin of Owatonna and bass player Anthony Madson of Hartland, is breaking into the music scene across southern Minnesota.

Playing anywhere from Owatonna to Rochester to Mankato — and everywhere in between — the band draws anywhere from a couple hundred to a thousand people at their concerts.

“We’re trying to overtake southern Minnesota pretty much and then spread out from there,” Sather said.

Covering songs from Audioslave, Hinder, Buck Cherry and Velvet Revolver, as well as some classic rock songs from Pearl Jam, Night Range, Bill Idol, Foreigner and AC/DC, the guitarist said the group is trying to open up its performances to appeal to different age groups. Eventually, they hope to have three different sets, including one for a younger crowd and one for an older crowd. 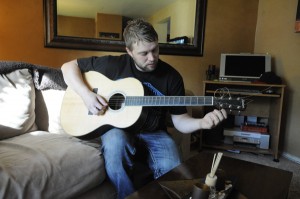 Tristan Sather tunes his Larrivée acoustic guitar in his Albert Lea home. While he plays electric guitar often in the band Bad Monkey, he primarily plays acoustic guitar. See this story and more like it in Southern Minnesota, Oct. 31. -- Tim Engstrom/Albert Lea Tribune

Other artists the band covers include Soundgarden, Seether, Chevelle and Breaking Benjamin. They are starting to perform some Led Zepplin hits, and if anyone has any other artists they’d like the band to try out, they will do that as well, he added.

Sather said currently the band is trying to branch out mainly through word of mouth, but sometimes they look into performing at new venues as well. Recently they’ve performed at Bar Games in Northwood, Iowa, Reggie’s Brewhouse in Owatonna, along with a slew of summer festivals, including Borderfest in Emmons and the Freeborn County Fair.

Eventually, he noted, the band would like to be on the level of cover band Hairball, which only plays a few shows a month in front of a couple thousand people and gets paid well.

They have also recorded a few songs during the summer and hope to have some of those released soon.

Sather said when the band is not playing together, they have other various hobbies.

For Sather, specifically, that means fishing and disc golf. He also has two cats, named Jimi and Hatfield, and he lives in Albert Lea with his girlfriend, Jenny Christensen.

Bad Monkey can be found on Facebook by typing in “Bad Monkey” and on MySpace at www.myspace.com/badmonkeyrocks.