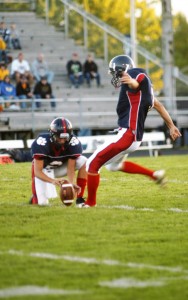 Albert Lea’s Kyle Kriewall (2) holds the football while Alik Smed (3) attempt a 35-yard field goal against Waseca at Hammer Field. Smed made the field goal, the first of his career. -- Andrew Dyrdal

Alik Smed, 17, didn’t get to the Albert Lea-Faribault football game until late in the first quarter — his mom rushed him to Bruce Smith Field after his soccer game in Owatonna.

Missing his field goal kicker after the Tigers’ first score, Albert Lea head coach Clay Anderson sent tight end Chris Stahl onto the field to try the extra point. Stahl made it, but Anderson was anxious for Smed to arrive.

He did soon after, and got his first chance to add to the scoreboard midway through the second quarter after Kyle Kriewall passed to Dalton Westerlund for a touchdown. 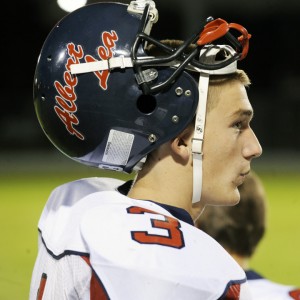 Smed set, kicked and turned to run back toward the sideline before the ball even reached the goalposts. He knew it was good.

But that’s not why he turned his back so quickly. Smed’s job doesn’t end after he tacks one more point onto the scoreboard.

“I’m always thinking one step ahead,” Smed said. “I have to hurry up and kick and then go get the tee for kickoff — and I can’t forget to bring the (kicking) block back.

Smed is used to juggling obligations.

Besides being the Tigers’ kicker, Smed is a captain of the boys’ soccer team, and the football game in Faribault started a week with six games in six days between the two sports.

Smed considered being the Tigers’ kicker last season but the soccer and football schedules conflicted too often. This year, they did only once.

Anderson, who is also the school’s activities director, is thankful.

“Alik is a good kicker” he said. “He’s a good athlete who can do a lot of things. The more he kicks the football, the better he will get at it.”

Before the Tigers’ season opener against Waseca, Smed had butterflies. He had plenty of warmup kicks before the game but was called upon early — a 35-yard attempt in the first quarter.

“I didn’t want to let the guys down on the first scoring opportunity,” Smed said. “I was really nervous, which is weird because I’ve been in sports for years and I’ve never been nervous.”

Smed collected himself on the field and split the uprights, giving the Tigers a 3-0 lead.

Smed made his first extra-point opportunity, too, but missed his second, the only one he’s missed all season.

“I was like ‘Oh man, it’s an extra point; they’re going to think I’ll miss them all now,’” Smed said, laughing.

It turns out he hasn’t missed one since. Smed made a 31-yard field goal at Winona and is now 13-for-14 on extra points, giving his coach a lot of confidence.

Smed said the farthest field goal he has made in warmups is a 47-yarder before the game in Winona. He’s tried a couple 50-yard field goals, as well, but hasn’t made one.

“I think if I really got my foot into it I could make it,” Smed said.

In a season of firsts for the Albert Lea senior, Smed also got a his first tackle at Rochester Century after a kickoff. He said his teammates laughed at him after hearing his name credited for the tackle over the loudspeaker.

“Just because I’m a soccer player doesn’t mean I can’t tackle,” Smed said. “I think it caught everyone by surprise.”

Smed also said that while he hasn’t given it much thought, he would kick in college if the opportunity presented itself.

“People always mention that,” Smed said. “I think that would be really fun. If it’s an option, I’ll definitely take it.”

Anderson said that Smed is the best kicker he’s had while at Albert Lea and a big weapon for the Tigers. That was on display Friday night against Mankato West when Smed opened the second half by booting the football through the back of West’s end zone.

“It’s fun,” Smed said about playing on the football team. “The soccer guys and the football guys are completely different types of people. They like to have fun in different ways. They’re really open to having a soccer player on the team.”