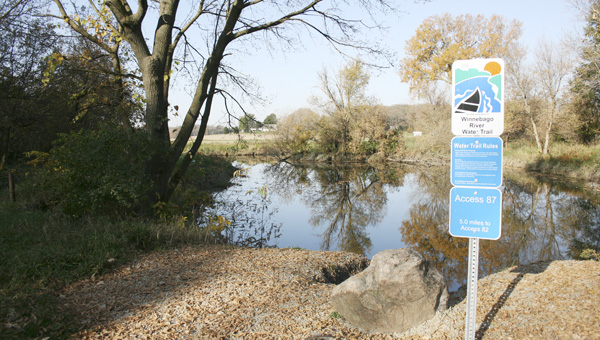 “Now is a great time to be on the river. Colors are changing, waterfowl and other non-game bird life will be migrating soon,” said Robert Schwartz, board director of Winnebago County Conservation. “The water levels are very good for this time of year as well.”

The water trail spans 27 miles of the Winnebago River, from Dahle Park in Lake Mills to Pammel Park in Forest City, Iowa. It was officially dedicated in June after four access points were added for canoes, and volunteers spent over a year cleaning the waters along the trailway. The Iowa Department of Natural Resources has also designated the Winnebago Water Trail an official state river water trail system.

“This is a new adventure for us,” said Marilyn Hoffman, executive director of the Lake Mills Chamber Development Corporation. “We’re excited to bring the opportunity to tourists.”

The first canoe access point is tucked away in Dahle Park, located along Winnebago County Road A16, just north of Lake Mills. The park also offers camping with electricity, a shelter house for picnics and benches along the river’s head for those who wish to relax and enjoy the ambiance.

From there, the water trail runs south with a second access point about four miles downstream in the Lande River Conservation Area. The third access point is about another 14 miles south at the Ambrosen Recreation area near Leland.

The trail ends about another 10 miles downstream, at Pammel Park, where the fourth canoe access site was installed.

Schwartz estimated that the entire canoe trip takes a “strong” eight hours. He also said that the river trail goes under a number of overpasses that can also be used as access points along the route.

He said people can expect to see a variety of wildlife on their journey down the water trail, including deer, river otters, turkey, bald eagles, kingfishers, great blue heron, owls, sharp-shinned hawks, red-tailed hawks, Canada geese and a variety of ducks, just to name a few.

Schwartz said the trail has been received well, and he took calls from locals and community visitors about the trail all summer long.

“We have received only positive comments from those that use the trail. Many have never canoed or kayaked, or it had been years since they last canoed,” said Schwartz.

Schwartz said that volunteers with Stream Keepers continue to maintain the length of the water trail.