Adventures from a fishing trip in Alaska

By Dick Herfindal
Woods and Water

Have you ever wondered what it would be like to catch so many big fish that you actually get tired of it? This may be the fantasy that some of us have always envisioned but for my niece, nephew and brothers-in-law it was a reality. In the second week of September my brother-in-law Ron and his son 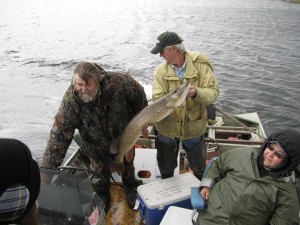 Lynn Johnson, left, steers the boat as his wife, Margaret, right, watches while Lynn’s brother Ron of Eagan, holds up an Alaskan pike he caught on a mid-September fishing trip to Nome. He estimates the pike was at least 25 pounds. -- Submitted photo

Jordan and daughter Jenna flew to Nome, Alaska, to visit his brother Lynn and his wife Margaret (we  call her Sister). The plan was in place for a little sliver salmon fishing and of course if you fish with Lynn he will want to take you pike fishing.

They started their fishing adventure fishing the Kruzitrin River, which is a ways north of Nome, where Lynn and Sister live. They had caught a few silvers and then turned their thoughts to pike fishing. About all they could muster were a few 3 and 4 pound fish but Lynn knew that there would be some big pike to be had if they could find them. Next they fished the Pilgrim River with similar results before Lynn headed into a slough that was just off of the river. He said that in normal years the sloughs would be too weed choked to fish but the water was really high and they were able to fish this one slough.

Lynn said that as they went over this certain weed bed they started catching fish as soon as they hit deeper water. He said that it was not unusual for three of them to have a fish on at the same time. In estimating the catch he figured that they had caught about 50 pike in about five hours of fishing. At least 25 of those fish were 15 pounds and up with 6 of them going over 20 pounds. They were catching most of those “wolf fish” on black and white Daredevilles. This goes to show that some of the old lures that we grew up using work just fine today. I don’t think these fish have been exposed to many or for that matter any fishing lures so whatever it is about that lure that triggers them tells me that the guy who invented it knew what he was doing.

Jenna, my niece caught a 25 pound pike and Ron, her dad caught one that was close to 30. Jordan caught at least one of those big old hawgs and after about five hours of fishing they were all about 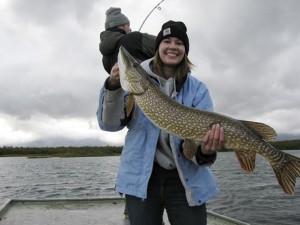 Jenna Johnson of Eagan, niece of Lynn Johnson, holds up a 25-pound pike she had just caught while her brother Jordan in the background is fighting a fish of his own. They were fishing in a slough just off of the Pilgrim River north of Nome. -- Submitted photo

fished out. I get a sore arm just casting for muskies so I can only imagine having that many fish on.

This is like one of those outdoor adventures that I would read about in an Outdoor Life or Field & Stream magazine that I had as a kid. I would daydream about an experience like this but never would I have envisioned having the chance to experience this kind of fishing. There may be a time in the near future that I’ll try and get to Nome and Lynn will let me experience it first hand.

I’ve always felt that I have led a pretty active life when it comes to the outdoors but compared to Lynn it actually seems pretty boring. After Ron and the kids had left for Minnesota, Lynn and Sister headed out to do a little moose hunting. The season on bulls had closed but Sister was lucky enough to draw a cow permit, which only has a small window of opportunity in that part of Alaska.

They headed up the Snake River in Lynn’s boat and as they were coming around one of the river’s bends Sister heard something so they slowed and as they approached the turn there was a moose standing on the bank. Sister was able to drop it with her first shot and after making sure it was finished they began to butcher it. Lynn said that he could touch the moose with one hand and the boat with the other so they didn’t have to carry the meat any long distance. With the number of grizzlies that are in the area it’s pretty nice to not have to go through the bush with a bunch of meat. Most of the terrain in that part of Alaska is covered with small trees and bushes that stand less than head high so a bear could pop up at almost any time without a lot of warning.

As far as I can recall I’ve never had the need to carry a .44 caliber pistol with me while on a fishing trip to Waterville. Lynn says that it is just something that is automatic when he goes fishing and he says he likes to carry a gun that is usually just a little bigger than necessary to protect yourself. This makes him feel pretty safe when he heads out into that Alaskan wilderness.

When they were fishing the Kruzitrin River they spent the night camping in tents on a sand bar in the river. With an abundance of berries and silver salmon around the bears probably weren’t looking for a meal “outside the box” but who can predict what nature has in store.

Lynn has a 20-foot Lowe flat bottom boat with a 140-horse power Suzuki with a jet unit on it. The jet unit is necessary because sometimes he runs through water that is only 5 or 6 inches deep. Even with that jet unit there are times when a rock will come up and bite the bottom of the boat and put a gash in it. There has been more than one occasion when he has had to do a patch job while out in the bush.

You might say that he is truly living the ultimate outdoors adventure. Fishing trips like this and the hunting experiences he has had over the years are the experiences that books are written about.

As the deer-hunting season grows closer a lot of you will be experiencing your own outdoor adventure, but just a little closer to home.

Please remember our brothers and sisters who are proudly serving our country so that we can enjoy the freedoms that we have today.

Dick Herfindahl: It’s a great time to get out and enjoy the outdoors

Dick Herfindahl: Spring has officially sprung, so get out and enjoy it