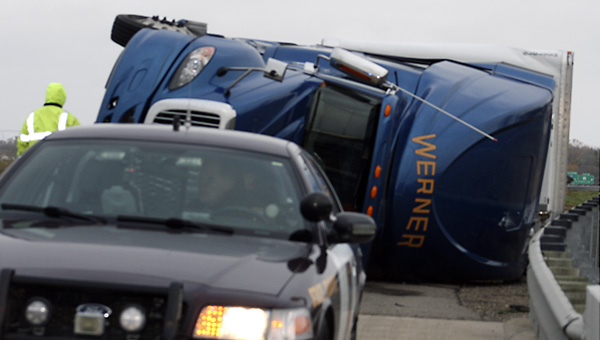 This semitrailer rolled over Wednesday morning south of Exit 11 on southbound Interstate 35. Traffic was diverted to one lane. --Sarah Stultz/Albert Lea Tribune

A large gust of wind blew over a Werner Enterprises semitrailer Wednesday morning on Interstate 35 just south of Exit 11 and north of Albert Lea Lake.

The big rig, a 2010 International semi, rolled onto its driver’s side at 8:20 a.m., blocking the left southbound lane and left shoulder of the interstate.

Freeborn County Sheriff’s Office Chief Deputy Gene Arnold said the trailer was hauling an empty load, and that’s why it was probably more susceptible to the wind.

The semi’s driver, Richard A. Rummage, 46, of Charlotte, N.C., had to be extricated from the cab because of how the semi rolled. He was treated and released at Albert Lea Medical Center.

As law enforcement officers and firefighters responded at the scene, traffic on southbound Interstate 35 was directed to one lane. All southbound lanes were closed while the semi was uprighted, and the road re-opened at 10:05 a.m., according to the Minnesota State Patrol.

According to the National Weather Service, at about 8:30 a.m. there were westerly winds at 22 mph with gusts up to 40 mph.