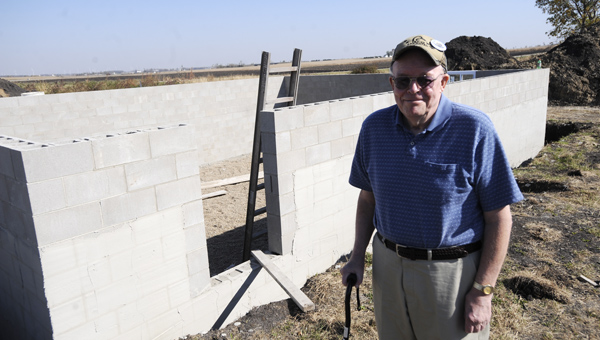 Ron Woodside stands near the foundation of his next home, being built on the three acres he owns northwest of Armstrong. It is the same location where his trailer home was hit by a tornado June 17. -- Tim Engstrom/Albert Lea Tribune

ARMSTRONG — Almost four months after the June 17 tornadoes destroyed his home and ultimately killed his wife, tornado survivor Ron Woodside is getting ready to move into his new home.

Woodside, 77, who received 27 broken bones after an EF4 tornado swept over his property, was released last Thursday from the transitional care unit of Good Samaritan Society of Albert Lea. He noted it was 10 days shy of four months since the tornadoes changed his life forever. 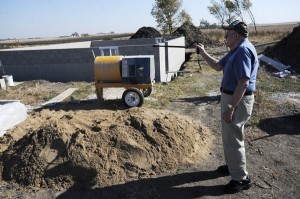 Ron Woodside points with his cane when describing changes that are coming to his three-acre property. -- Tim Engstrom/Albert Lea

“I’ve never been more close to God than I am right now,” he said. “I couldn’t blame the Lord or anybody for what has happened.”

Though he has a way to go until he’s fully recovered, he is now walking again on his own with the assistance of a cane and is planning to move into his new home — a prefabricated home made in Mason City, Iowa — by Nov. 1. The basement of the house, at the same site of his former residence, has already been built.

He said he tries not to let the sadness over the death of his wife, Kathy, 67, and their devastation get him down.

“Don’t give into it,” he said. “I’ve still got a lot to live for. I still have lots of children and grandchildren. I’m very fortunate.”

Visiting the scene of the tornado

Woodside said he first went out to his property at 69509 220th St. to see the devastation of the tornadoes about a month and a half ago. 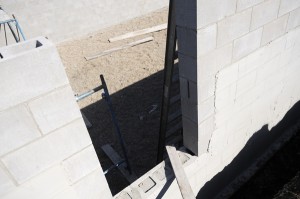 Pictured above will be the back door of Ron Woodside’s new home. -- Tim Engstrom/Albert Lea

“It was really tough,” he said. “I got across Highway 13 and looked at all the devastation of my friends and neighbors out there. It was hard.

“Then, of course, when I got to my place, it was horrible. We had 10 buildings out there, all full of stuff, and everything was gone. My car, my truck — everything. It had to be a tremendous force and power to take that.”

He’s been out there now about four times, plus one time on Monday with the Tribune.

During his visit Monday, he recalled his experiences June 17.

He said that night he and Kathy had heard there was some bad weather coming to the area, but because they couldn’t see anything bad out their windows they decided to stay. The sky started getting grayer near one of his barns but they thought it was merely rain.

Woodside was ultimately taken to St. Marys Hospital in Rochester and was in and out of consciousness for six days. Kathy died.

He said doctors have been curious about his experiences and tell him that they seldom — if ever— see someone who survives what he experienced.

Woodside said he thanks God for all the help people in the community gave to him the night of the tornadoes and in the weeks that followed.

Raised in the Lutheran faith, he said he had lost his faith in his fellow humans in recent years.

“When this all happened to me and the people gathered around me and came out to help, I knew there was a lot of good people out there,” he said. “I thank God for them and for all the help I got. I felt maybe he had a purpose for keeping me alive.”

He now has a new attitude toward life and doesn’t feel any bitterness about his situation.

A year from now, he hopes to be back to at least 75 percent of where he was at before June 17. He plans to go on a duck hunting trip with his sons.

“I hope to get back to doing most of the things I was doing,” he added.

In the meantime, he said, he will continue on with his life the best he can, trying to stay busy and get plenty of exercise.

Over the next few weeks until his house is erected, he will be staying with his children.

Woodside said his daughter was adamant about him moving into town, but with three acres and a well and septic system already set up, he decided to rebuild at the same location.

His new home will be smaller than his old home — probably right around 1,000 feet — but it will be enough for what he needs.

He said he thinks Kathy’s death will affect him more when he moves into his new home.

“It’s not going to be easy for a while, but I’ll just have to muddle through it.”