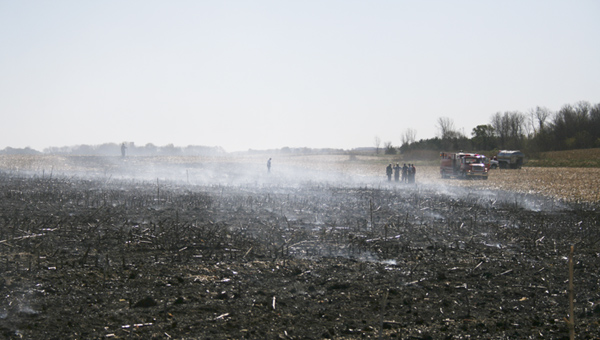 The blaze occurred on the property of Russell Nelson at 66039 160th St.

According to Conger Fire Capt. Doug Kuethe, a stock chopper hit a rock that sparked and started the fire. A few acres burned, but no damages were reported, as the corn had already been harvested from the field.

Kuethe said about 12 firefighters responded to the call, along with a handful of local farmers. The call came in at about 11:20 a.m.

Ron Theusch of the Conger Fire Department said this was the second field fire the department has responded to in a 24-hour period.

A fire was reported Tuesday at the property of Claire Drescher at 20535 680th Ave. three miles southeast of Alden.

Theusch said this was from a debris fire near a field, which spread to the field because of the windy conditions.

Theusch warned everyone burning leaves or debris to take extra caution until the next rain occurs.

“It’s really dry and the winds are picking up in the afternoons,” Theusch said. “Even if you’re burning leaves next to a field, be careful.”