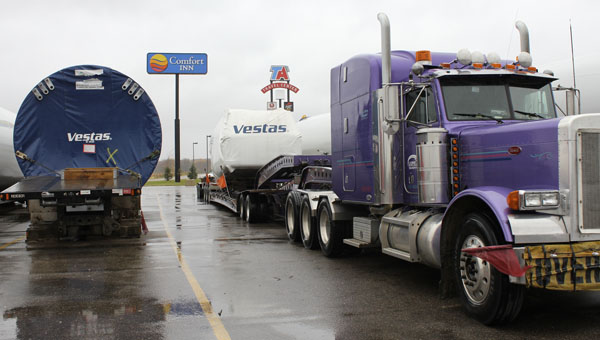 The wind blows a red flag on the bumper of a semi hauling a Vestas wind-power generator. The truck Tuesday was parked at Trail's Travel Center along with other trucks hauling wind turbine blades and tower sections. -- Tim Engstrom/Albert Lea

High winds and rain blowing in from the west were putting a damper on truck travel Tuesday as the area braced for winds topping 50 mph.

About 10 semitrailers hauling wind turbine parts and blades were parked for the day at Trail’s Travel Center of Albert Lea. 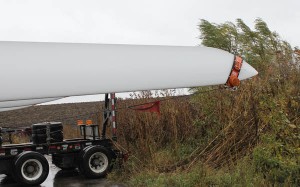 Ruppert was the lead car for Jeff Ray of Anderson Trucking. He had been attempting to haul a wind turbine blade from Fort Madison, Iowa, to Woodstock, near Pipestone. The two had arrived in Albert Lea on Monday night and made the decision not to go out on Tuesday because of the winds and the forecast for even bigger gusts coming through.

The National Weather Service has issued a hazardous weather advisory for Freeborn County and a high wind warning for the region.

Sustained wind speeds of 30 to 40 mph with gusts up to 60 mph blew through the area and continues into today. The advisory is in effect through today for central and southern Minnesota.

The weather station at the Albert Lea airport reported the strongest sustained winds at 1:30 p.m. Tuesday, reaching 25 mph. However, the strongest gusts the station recorded were near 7 p.m., when gusts hit 42 mph.

KIMT Chief Meteorologist Adam Frederick said the winds are in response to a strengthening low pressure system moving northward across the state Tuesday. He said the drop of the barometric pressure was the main reason for the high winds.

The winds were expected to slow down Tuesday night and increase again Wednesday morning.

Frederick also reported that high wind warnings are in effect from Wyoming to northern Ohio with tornado watches and lines of storms from Pennsylvania to Mississippi. 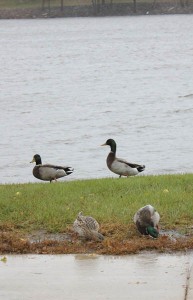 Albert Lea received 0.31 inches of rain Tuesday. Although the National Weather Service predicted a chance of rain and snow into Wednesday, Fredericks said conditions in the area are too warm to expect any accumulation at this point.

Extra caution is being recommended when driving in high winds, especially for large trucks and small cars.

“This wind and rain can turn a one-day run into a week,” said Ray. “With any wind, rain or snow, it’s just a waiting game.”

The total length of Ray’s rig, including the truck, trailer and turbine, measured about 186 feet long. He said when winds get above 20 mph, it’s not a good idea to even try to haul something of that size.

“You just can’t keep it on the road,” he said. “You can actually see the wind pick up the trailer and move it.”

Effects of high winds are especially noticeable in open areas and higher elevations.

The National Weather Service advises that winds this strong could lead to downed trees and power lines, causing minor damage to structures, as well.

According to Albert Lea Police Chief Dwaine Winkels, no problems had been reported as of Tuesday afternoon due to high winds, aside from a few campaign signs blowing around.

With gusts expected to increase again today, Winkels advised people to secure loose items such as empty garbage cans and grill covers to keep from blowing around.

He said to take extra caution around trees, as weak limbs could be a problem with high winds, too.

“These are extremely windy conditions, so consider before you travel if your travel is necessary,” said Lt. Eric Roeske of the Minnesota State Patrol.

He said if it’s necessary to drive, some safety tips include keeping both hands on the steering wheel, eliminating distractions such as cell phones and to be aware of debris blowing into the road.

“The key is maintaining control,” he said.