Funeral services for Howard (Howie) Jensen of Albert Lea will be held at 2 p.m. Tuesday, Oct. 12, at the First Baptist Church in Clarks Grove. Pastor Jamie Cameron will officiate. Visitation will be held Monday, Oct. 11, from 5 until 7 p.m. at the Bonnerup Funeral Service and one hour prior to the service at the church. Interment will be in the Clarks Grove Cemetery. 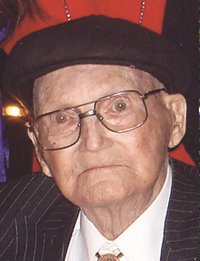 Howard was born May 5, 1920, in Freeborn County. When still an infant he moved to Denmark where he lived for over four years. He returned to Freeborn County at the age of 4 1/2 and went on to graduate from high school in 1940. On Dec. 9, 1949, he was united in marriage to Violet (Babe) Mellang in Sioux Falls, S.D.

Howard was an auctioneer and real estate broker in Freeborn County for many years. He was a member of the United States Trotting Association, the Minnesota Trotters, the Elks Club and AA. He was also a state champion dairy judge.

Howard loved racing horses and raced at the county fairs in five states for many years. He was an excellent horseman. Howard was an avid mink trapper, enjoyed hunting and playing cards. He fought many fights with the Golden Gloves and was always riding or racing his motorcycles.