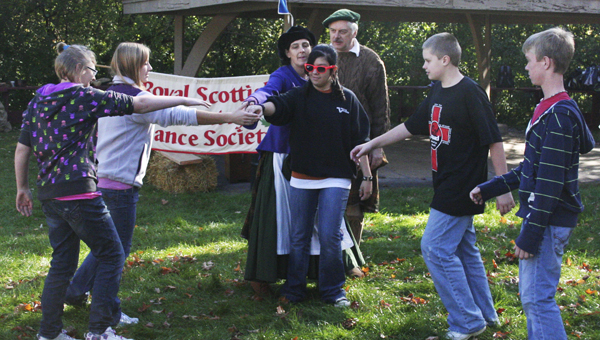 More than 3,000 student from southern Minnesota and northern Iowa will haved attended Education Days at the Big Island Rendezvous by the end of today. 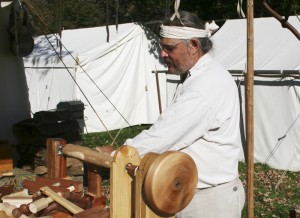 Roger Pilsner demonstrates how to use a lathe in woodworking. His lathe is powered by stepping on a pedal, and is unique in that it is also a workbench. -- Kelli Lageson/Albert Lea Tribune

Thursday and today, busloads of students come to Albert Lea’s Bancroft Bay Park to visit the Rendezvous, where they will listen to historians, see crafts being made and get hands-on learning of pioneer Minnesota history.

The Big Island Rendezvous is in its 24th year, and Education Days started about 21 years ago. More than 70,000 students have attended Education Days since the event started. This year there are more than 50 presentations.

When the students get outdoors and see actual demonstrations it ties into the work they’ve done with Minnesota history. 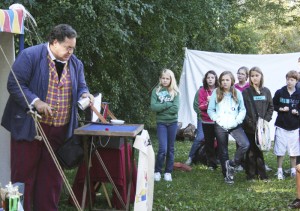 “They can get out of the classroom and learn from other people,” Lakeview Elementary School sixth-grade teacher Rick Harves said Thursday.

Harves said he likes that Education Days reinforces the learning the students have been doing about Minnesota history. One craftsman hopes that the students he talks to might take an interest in craft work for a career or hobby.

Roger Pilsner shows woodworking at the festival and hopes kids realize it only takes simple tools to make things out of wood.

“We’re not traditional educators,” Pilsner said. “I want to get kids interested because they can make tools in their industrial arts classes.” 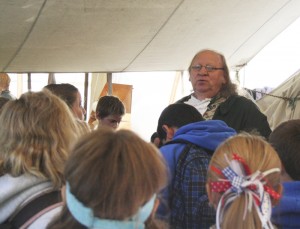 A Benjamin Franklin impersonator talks to fifth graders from Northwood-Kensett about the Declaration of Independence. Students got to see demonstrations of crafts and heard from historians as well at Education Days at the Big Island Rendezvous. -- Kelli Lageson/Albert Lea Tribune

He hopes that by making simple tools students will then move on to bigger projects. Pilsner built his own combination workbench/lathe to make wood products on and showed students how it works.

One student said her favorite part of the day was when they were able to throw wooden arrows at a target. Kallie Bumgarner, 11, from Ellis Middle School in Austin described how she was taught to throw the arrow.

“You put your thumb and ring finger in hoops and your pointer finger on the bow and act like you’re swatting a fly,” Bumgarner said.

Another popular event was the cannon demonstrations by the New Ulm Battery. The students were watching avidly when the cannons would fire. 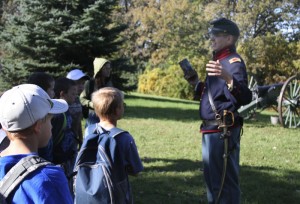 He likes that students aren’t afraid to ask questions. He said Education Days are a good thing because students can learn about things they won’t learn anywhere else.

Some of the demonstrations include blacksmith work, candle making, pottery and wilderness survival. Some of the lectures include the history of money, homesteading in early America, Native American lifestyles and the Lewis and Clark Expedition. 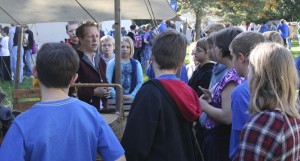 Fifth graders from Central Springs learn about pioneer women Thursday morning. Students got to learn about a variety of different crafts and hear from speakers at the Big Island Rendezvous Education Days. -- Kelli Lageson/Albert Lea Tribune

Perry Vining, founder of the Big Island Rendezvous, said students stay for the entire day Thursday or Friday. Every half hour, classes move to a different demonstration and they see a variety of the presentations, which number more than 50.

Students arrive anywhere from 8:30 to 10 a.m. and stay until as late as 3 p.m. Most students are in fifth or sixth grade, but there are groups as young as third grade. There is no live entertainment on Education Days, but the entertainment is added for the public on Saturday and Sunday.