Funeral services for Robert Wallace Linde, 80, of Albert Lea will be held at 10:30 a.m. Wednesday at Grace Lutheran Church. The Rev. Todd Walsh will officiate. Interment will be at the Graceland Cemetery. Military honors will be accorded by Freeborn county veterans organizations. Visitation will be from 5 to 7 p.m. Tuesday at Bayview/Freeborn Funeral Home and one hour prior to the service. To sign the guest book, go to www.bayviewfuneral.com. 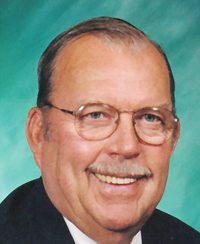 Robert Wallace Linde was born Oct. 8, 1929, to Perry and Tillie (Dolen) Linde in Lake Mills, Iowa. He grew up in Lake Mills and graduated from school in Lake Mills in 1946 at the age of 16. Robert was baptized and confirmed at Salem Lutheran Church in Lake Mills, Iowa. After graduating Bob enlisted in the United States Army. He served in the Korean War and was stationed in Germany. In 1957 he was united in marriage to Minerva Storby. She passed away in 1964. In 1965 he was united in marriage to Mary Bull. She passed away in 2004. Bob worked for Sorenson Bros. as a heavy equipment operator where he was a scraper and dozer operator. He was a member of Grace Lutheran Church, American Legion and Eagles. Bob enjoyed reading, traveling and camping. He loved spending time with his family and special friend Marie.

Robert was preceded in death by his parents and wives, Minerva and Mary.

He was a kind and thoughtful person and will be greatly missed.