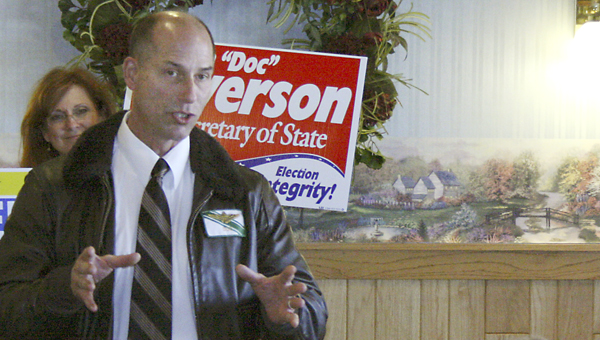 Republican hopefuls for three statewide races swept through Albert Lea Friday for their last time before the Tuesday general election, encouraging party members to vote in what they described as the most important election of their lifetime.

Anderson said according to SurveyUSA’s final pre-election tracking poll for KSTP-TV in Minneapolis, Emmer and DFL candidate Mark Dayton are in a dead heat for the gubernatorial seat.

That shows how important it is to get out to vote, Anderson said, noting the value of conservative voters in this election.

Regarding her own race, she said her campaign is about bringing fiscal sanity back to the Auditor’s Office. We’re going to bring the bulldog back,” said Anderson, the former state auditor from 2003 through 2006. She faces incumbent State Auditor Rebecca Otto, a DFLer. 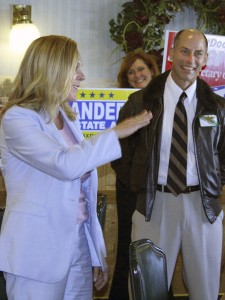 Republican state auditor candidate Pat Anderson, left, speaks in front of a crowd of at least 30 people on Friday at The Trumble's Restaurant in Albert Lea. Anderson, along with Republican candidates Dan Severson, for Minnesota Secretary of State, and Chris Barden, for Minnesota Attorney General, were in town as part of a tour around the state just a few days before the general election. --Sarah Stultz/Albert Lea Tribune

In the secretary of state race, Severson said he thinks the state’s election system is broken, stating the only reason the state hasn’t seen fraud before is because it hasn’t been looked for.

He said he supports requiring photo identification for voting, noting that he thinks major government reform is needed.

Severson is running against incumbent Secretary of State Mark Ritchie, a DFLer.

Regarding the attorney general race, Barden said he seeks to end the 40-year DFL control in this office and wants to clean out the corruption in the Attorney General’s Office under incumbent Minnesota Attorney General Lori Swanson.

Barden said Swanson has not been protecting Minnesota residents’ constitutional rights, and he plans to join the challenge to stop “Obama care.” He would also protect a photo ID election system.

After the Albert Lea visit, the trio had scheduled to go to Mankato. They had just come from Rochester.