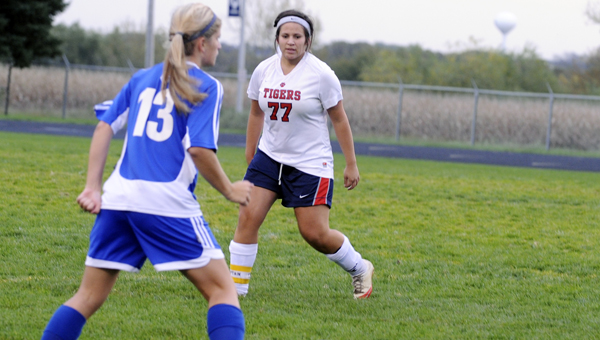 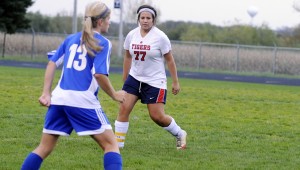 “We were able to stay patient and persistent against a stubborn Loyola team,” Albert Lea head coach Rick Barnhill said. “Unfortunately, we had no opportunity to prepare for their defensive tactics, but were able to display a strong will to overcome the challenges presented to us in regard to their style of play.”

Taylor Friehl scored the Tigers’ first goal in the opening half on Taylor Thompson’s assist. Overgaard put the Tigers up 2-0 with her goal on an assist by Lindsey Stewart.

After taking a 2-0 lead to half, Ariel Christensen put the Tigers up three on a goal assisted by Alayna Chavez, and Anna Anderson scored the team’s final goal unassisted.

The Tigers enter their final week of the regular season with matches against Mankato West tomorrow and Austin on Thursday.

The Tigers C-squad girls’ soccer team advanced to the championship match Saturday of the Kasson-Mantorville tournament after beating K-M 3-1 in a shootout. Isabel Erhardt and Hannah Savelkoul each scored goals, and Anna Waltman scored the game-winning goal.

In the championship match against Arcadia, Wisc., the Tigers again went to a shootout but fell 3-2.

“I’m sure they had some genuine fun and a sense of achievement after going through two nerve racking shootouts,” Barnhill said. “The program is very proud of their performance and coach Laura Hillman for their historic accomplishment.”