To remember, to prevent 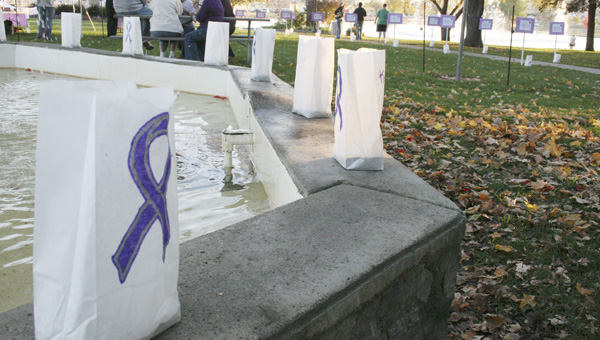 A luminaria decorated with a purple ribbon, signifying domestic violence awareness, sits on the edge of a fountain at New Denmark Park on Thursday evening. -- Sarah Stultz/Albert Lea Tribune

It takes the entire community to end domestic violence — but it is possible.

That was the message Thursday evening at the sixth annual Domestic Violence Awareness Community Candlelight Vigil at New Denmark Park.

About 75 people gathered at the event to raise awareness of the issue of violence and to make a pledge of nonviolence. 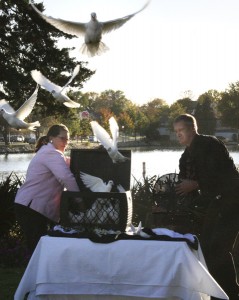 Jane and Steve Haukoos, of Alden, release doves into the air Thursday at the sixth-annual Domestic Violence Awareness Community Candlelight Vigil. This was the first year doves were released. -- Sarah Stultz/Albert Lea Tribune

Organizers said they didn’t want the event to be a sad one, but instead they wanted to educate and give hope to people who suffer from domestic violence.

“It’s something we can talk and need to talk about,” said Ilene Grosam, victims’ advocate for the Freeborn County Crime Victims Crisis Center. “It should not be kept a secret.”

At the start of the vigil, a series of doves were released into the air as a symbol of peace and inspiration.

A candle was also lit for each of the Freeborn County victims of domestic violence in the last 30 years.

“We’re trying to remember local victims so the families know we haven’t forgotten,” said Andrea Strom, who works in adult probation with Freeborn County. “We remember.”

According to the 2009 Femicide Report from the Minnesota Coalition for Battered Women, at least 12 women, 10 children and one man died from domestic violence during 2009 in the state. Two family members or friends who tried to intervene were also killed.

One of the women killed was Jody Lee Morrow, 38, of Albert Lea. Morrow was beaten to death with a hammer by her former boyfriend Chad Jamie Gulbertson in June 2009.

Strom said people don’t realize that since 1983 there have been eight domestic homicides in Freeborn County. 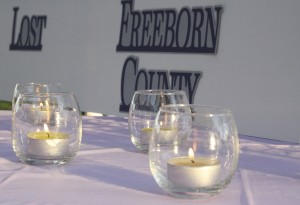 Albert Lea police detective Ben Mortensen said he’s been in law enforcement for about 30 years, and in merely the last 10 years alone he’s worked as an investigator on three homicides that were a result of domestic violence. The most recent was Morrow’s.

Mortensen said he would rather go out on a call of reported domestic violence that turns out to be nothing than to have another name added to that list.

He wanted people to know of all the organizations in the city and county that are involved with preventing and ending domestic violence cases. Those include dispatchers who first take a call on the phone, patrol officers who respond, the Crime Victims Crisis Center staff, prosecutors, victims witness protection, judges and probation officers, among others, indicating there is much support for victims. 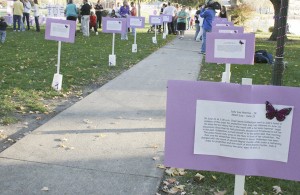 Information about each person killed in the state last year because of domestic violence lines the sidewalk at the sixth annual Domestic Violence Awareness Candlelight Vigil Thursday. In the forefront is a sign for Albert Lean Jody Lee Morrow, 38, who was beaten to death with a hammer by her former boyfriend Chad Jamie Gulbertson. -- Sarah Stultz/Albert Lea Tribune

Barb Sorum, with Prevent Child Abuse Minnesota and the Hugs Council, said when people hear a report of domestic abuse on the news they should think about what can be done to prevent this from happening again instead of feeling saddened, angry and wanting to push the blame on someone.

“Don’t be scared to make that call,” Sorum said. “If it’s a worthy report, leave the decision to the authorities.”

A friend of the late Tammy Hughes, who was murdered in Albert Lea by her husband in 2005, spoke about how Hughes’ death affected her.

She encouraged people to learn the signs of abuse and to never be afraid to ask for help.

To call police about a domestic violence situation, contact 911 for an emergency or 377-5205 for a non-emergency. The Freeborn County Crime Victims Crisis Center can be reached at 377-5461.

The vigil is just one of several events planned in October during Domestic Violence Awareness Month. 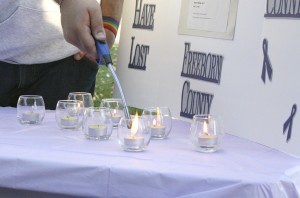 Also planned during the month is a “Hands Are Not For Hitting” demonstration on the main level of City Hall on Oct. 12 and on the first floor of the Freeborn County Government Center on Oct. 14. For this, handprints will be collected on a banner from people who walk into the building, who will pledge not to use their hands for hitting.

The banners will go on display in the Department of Human Services building and in the Government Center.

Purple ribbons are also being distributed at various locations, and there is a display about domestic violence in a storefront at the Northbridge Mall.

Look to Sunday’s Tribune for a story about how children are affected by domestic violence.

Candles were lit Thursday to remember and honor Freeborn County women and children who have died because of domestic violence.
Their names were read aloud:

— Data from the Minnesota Coalition for Battered Women Femicide Report and the Freeborn County Records Department.