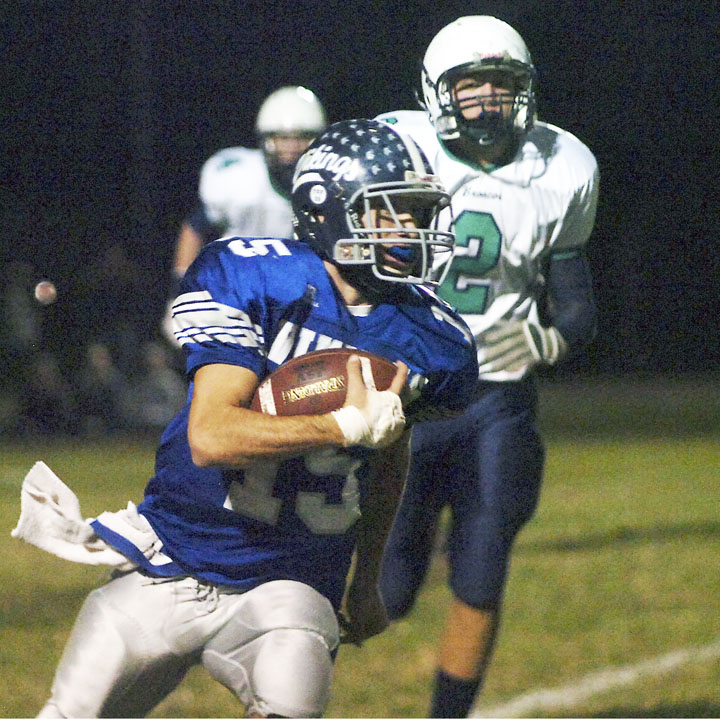 NORTHWOOD, Iowa — It took the Northwood-Kensett Vikings football team exactly 16 seconds to get on the scoreboard Friday as quarterback Spencer Capitani rushed for a 74-yard touchdown run on the first play of the game in the Vikings 49-6 win over the Belmond-Klemme Broncos.

“We were fortunate to get some good field position early in the game,” Vikings head coach Dave Capitani said. “We were able to get some early scores, and we had a big run right off the bat. We forced a couple of turnovers and made some big plays on defense.”

In the second quarter it was much of the same as Nik Werner scored on a 10-yard run with 9 minutes and 17 seconds left before halftime to give the Vikings a 20-0 lead.

Less than three minutes later, it was the N-K defense that made a big play as defensive lineman Bryan Sime picked up a Belmond-Klemme fumble and returned it 47 yards for a touchdown to give the Vikings a 27-0 lead.

Spencer Capitani added to the total score minutes later as he bolted for a 34-yard touchdown run to give Northwood-Kensett a 34-0 lead with 5:01 remaining in the second quarter.

Nik Werner capped the scoring in the second quarter with a 17-yard run that put the Vikings up 41-0 at half-time.

After halftime, Northwood-Kensett scored once in the third as Tanner Haberman reeled off a 50-yard touchdown run to give the Vikings a 49-0 lead.

The Broncos got on the board six seconds into the fourth quarter as Reed Lette scored from seven yards out to make the score 49-6.

Capitani led the offense in rushing with 143 yard on nine attempts and had three touchdowns on the night. Werner added two touchdowns, while Tanner Haberman also had a rushing touchdown.

While the Viking offense rolled, the Northwood-Kensett defense did its job as it shut down the Broncos.

The Vikings forced the Broncos into four turnovers on the night.

The Vikings also held the Broncos to 181 yards of total offense.

Werner led the Vikings in tackles with 11, while Tanner Haberman and Tim Davis both had one interception a piece.

“I was pleased with our defense,” Capitani said. “They do a lot of things you don’t see a lot. They spread you out a lot with no back and run a lot of option stuff. You have got to do your assignments, and I thought are kids for the most part did a pretty good job.”

The Vikings have won four straight games and will host the first round of the district playoffs on Wednesday night against Clay Central- Everly.