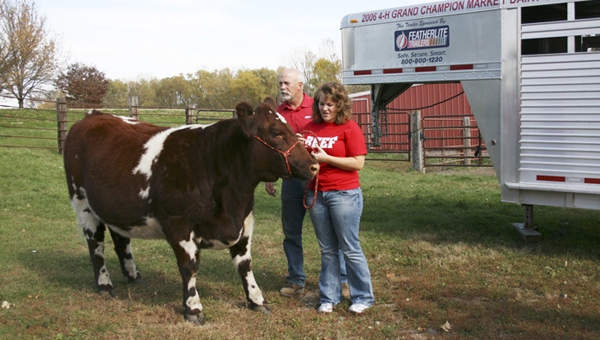 Maddy Ruble and her dad, Doug, lead Rosie the shorthorn heifer from the barn to the lot at the family farm, just west of Albert Lea. -- Michelle Haacke/Albert Lea Tribune

When Maddy Ruble of Albert Lea found out she won a spot on the 2011 National Beef Ambassador Team, it may have just been her most “fabulous” accomplishment to date, along with the most nerve-wracking moment of her life.

“I couldn’t eat breakfast that morning, I was so nervous,” she said. “I hardly made it up on stage!”

Maddy, the daughter of Doug and Pam Ruble of Albert Lea, was named to the team at the annual competition Oct. 1 through 3 in Rapid City, S.D. She competed against 26 other contestants from across the United States in the areas of consumer promotion, classroom presentation, media interview technique and issues response. 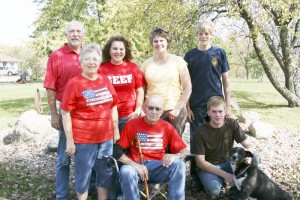 Maddy Ruble is a sixth-generation cattle producer. She's pictured here with her parents Doug and Pam, grandparents Maureen and Glenn, and brothers Grady and Riley Ruble.

In addition to being named one of five to the national team, she also took home the top award for the classroom presentation category.

It was the same presentation she had made to several area elementary students last year, comparing nutrition in cows to that of people by displaying real foods that both eat.

“For cows, I had corn, soybeans, oats, wheat and barley,” she said. “And for people, I made a mix using Kix cereal, pretzels, Cheerios and candy corn, showing that we eat grains like the cows. It was a great visual.”

“The judges in the CattleWomen were extremely impressed. They want to use the idea nationally,” said Doug.

Maddy first found out about the national team a year ago when she served as the Shorthorn Lassie at the Minnesota Beef Expo competition. “I sent in the registration. All I knew was that this would be a beef spokesperson team,” she said.

She was chosen to be a Minnesota beef spokesperson last year and spent her senior year at Albert Lea High School making classroom presentations to elementary classes, along with her other 4-H and FFA projects. 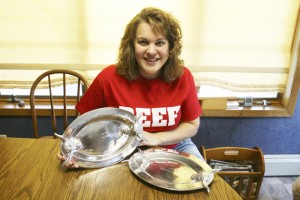 Maddy Ruble shows off two engraved silver steak platters she received when she was chosen to be on the 2011 National Beef Ambassador Team.

This was all work that would prepare her for her role on the national team.

As a part of this team, Maddy and four other team members will take turns traveling around the U.S. to consumer events and act as a spokesperson for the beef industry. She could have the opportunity to go to the Boston Marathon, the New York State Fair, a major trade show in Pennsylvania and a Legislative session in Washington, D.C., just to name a few.

“These are not really ag events, but events where the general public will be exposed to the beef industry with our booth,” she said.

Maddy said she will probably go to just a couple of those shows on the weekends, to work around her freshman schedule at the University of South Dakota, where she’s majoring in Spanish and political science.

Maddy will spend one year in this role, and once completed, she will receive scholarship money toward college and have the opportunity to vie for an internship with the USDA in Washington, D.C. “A USDA internship would be fabulous!” she said.

A sixth-generation cattle producer from Albert Lea, Maddy is working toward a future in the area of agriculture and after college, would like to attend law school and get into ag law.

“I still remember when she broke her first calf,” said Doug, telling the story of 8-year-old Maddy and her 6-year-old brother Grady breaking their first calves in preparation of Maddy’s very first baby beef show at the Freeborn County Fair. 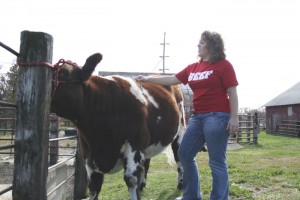 “It was two weeks of Maddy crying and screaming and being mad, and after that she got used to it and we’ve laughed about it ever since,” Doug continued.

Since that time, Maddy’s worked hard and won several accomplishments in agriculture, including showing the 2006 Champion Dairy Beef at the Minnesota State Fair, Champion Lightweight Steer, Shorthorn Lassie at the Minnesota Beef Expo last year, along with a number of leadership roles in 4-H and FFA over the years. She’s also volunteered for the Red Cross and United Way.

But she doesn’t wish to take the credit alone for any of her accomplishments.

Her father agreed that it was a team effort and said he was proud of what Maddy has accomplished.

“I’m humbled to have such an accomplished child,” said Doug.

Pam credits Maddy’s successes to her involvement in 4-H and FFA while growing up. “Those gave her many life skills, organization and people skills, leadership skills, all of which will help in her future,” Pam said.

The 2011 National Beef Ambassador Team was funded in part by the Beef Checkoff program, along with support from the state CattleWomen and Cattlemen’s associations, state beef councils and the American National CattleWomen Foundation.