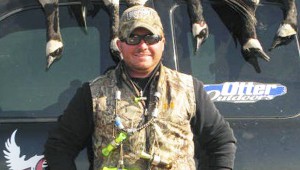 It has always been Ben Meillier’s dream to own a hunting guide service, and he found that dream two years ago in the back of a Cabela’s.

Working as a backstocker at Cabela’s in Owatonna, Meillier, of Albert Lea, met a friend who referred him to Tim Peterson, an avid hunter from Minnesota.

The two co-owners felt they had their bases covered. Meillier guided hunters in southern Minnesota, while Peterson covered the northern part of the state. Then the two realized it was that type of statewide coverage that made their young company unique.

“We can go to them” Meillier said, of his business pitch to clients. “We’re all over Minnesota. That’s what we do differently.”

Landing Zone Outfitters, which Meillier quickly refers to as LZO, now employs 15 guides statewide and runs hunts in every corner of the state. LZO even has clients in southern states who get the itch to go hunting in the midwest before the season begins down there. Meillier said he’s guiding five hunters from Kentucky in December.

When on a guided hunt, LZO supplies hunters with blinds, decoy and other equipment. They just need to bring a valid license, camouflage, shells and a gun.

LZO has one 6 feet by 12 feet trailer and one 6-by-10 trailer full of full-body decoys and 13 layout blinds.

LZO runs from September through December and serve hunters of every skill level.

Meillier said some of his clients are very experienced but don’t have the time or equipment for a successful hunting trip.

“Some people just want to pull the trigger,” Meillier said.

Others want to take advantage of LZO’s guides’ calling abilities, which Meillier said are top notch and some of the best in the state.

Of the 15 guides Meillier employs, four are from Albert Lea, including Kris Pleiss, Wade Johnson and Eli Regal, and each guide is responsible for a portion of the state.

“Their skills are calling, knowledge of field or water decoy setup and scouting,” Meillier said. “Their responsibility is to get the birds to the client.”

Meillier said he doesn’t guarantee his clients will shoot a lot of birds, but has a

“three-strike” policy in place, where he will reschedule a hunt up to three times in case there aren’t a lot of birds to shoot at.

“There are no guarantees,” he said. “That’s why it’s called hunting and not killing.”

Meillier said he serves the most clients in the southeast metro, but is also busy in south central Minnesota and just north of the Twin Cities. He also said his number of clients has doubled in the past year.

LZO currently has partnerships with Cabela’s, Beavertail and MinnesotaFlyWay.com. Meillier will use these companies’ products on his hunts and promote them through videos on his website, in return for discounted prices and advertising on their sites.

A year ago, LZO also began selling their own apparel on their website and it accounts for 30 percent of the company’s profits.

Meillier’s future plan is to open a LZO store and lodge in Becker where he and his employees can work and sell merchandise. It would also be a lodge where hunters can stay when on guides north of the Twin Cities.

More information about LZO can be found at www.LandingZoneOutfittersMN.com.