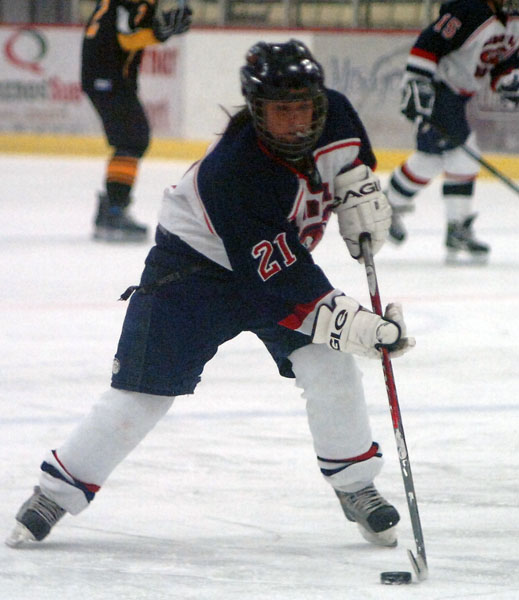 Mankato East/Loyola’s Amanda Broman scored the game-winner one minute and 24 seconds into overtime to push the Mankato East/Loyola Cougars girls’ hockey team past the Albert Lea Tigers 3-2 on Thursday night at City Arena.

With 6:36 remaining in overtime, Broman carried the puck down the ice and swooped in and put a backhand shot on net that went past Albert Lea goal-tender Sydney Conley to secure the win for the Cougars.

“Were a young team thats learning a new system and it showed tonight,” Tigers coach Paul Willett said. “Overall, I’m pleased with what we did and it will take some time.”

While it will take some time for the Tigers to learn a new system, it didn’t take a lot of time for Albert Lea to get their first goal of the season.

Albert Lea’s Sophia Jepson took a pass from Anna Anderson and shot it past Cougars goal tender Melany Anderson to give the Tigers a 1-0 lead.

The lead wouldn’t stand for long as the Cougars Savannah Quandt got loose on a breakaway and scored a power-play goal to tie the game at 1-1 with 5:17 remaining in the first period.

The score remained 1-1 until the second period when Quandt got free on a breakaway again and scored her second goal of the game to give the Cougars a 2-1 lead with 49 seconds left in the second period.

In the third period, the Tigers used the Jepson-Anderson connection again as Anderson fed Jepson with a pass and Jepson snapped a shot past the Cougars goal tender to tie the game at 2-2.

That set the stage for Broman’s game-winner in overtime to push the Cougars to a 3-2 win.

Quandt finished the game with two goals, while Broman had one goal for the Cougars.

The top line of Jepson, Anderson and Kaley Waldemar produced four points on the night with two goals and two assists for the Tigers.

“When they learn our system and become comfortable with it, they will be dangerous.” Willett said.

The Tigers tallied five penalties during the game, one which led to a power-play goal for Mankato East/Loyola.

The Cougars only committed one penalty.

“We took a couple of penalties being aggressive and I’m okay with that,” Willett said. “We made a couple of mistakes and got held up in the box. We put ourselves behind the eight ball because we had a short bench.”

Melany Anderson earned the win as she recorded 19 saves on 21 attempts.

Sydney Conley took the loss as she had 21 saves on 24 attempts.

The Tigers are in action next Thursday at Northfield as they play their next four games on the road.