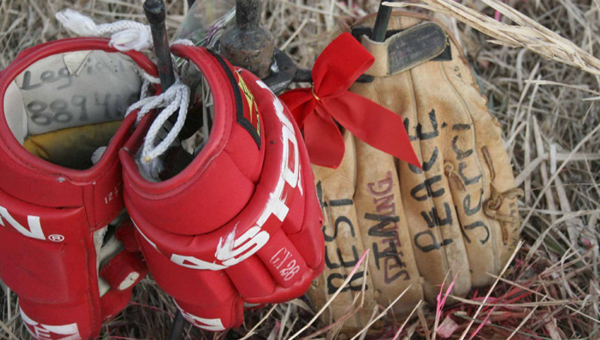 Twenty-three-year-old Jerri Mondeel was an avid softball and hockey player as evidenced here at the site of a memorial placed off of State Highway 251 Sunday. --Sarah Stultz/Albert Lea Tribune

As friends and family begin to grieve the loss of the 23-year-old Maple Island woman who died Saturday in a vehicle rollover, they are also remembering the memories of fun and laughter they shared with her.

Amid the difficult news of Jerri Mondeel’s death, her family and friends said they will remember her smile and outgoing personality. 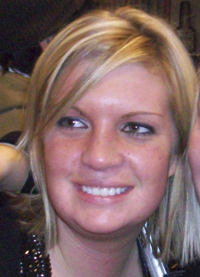 They described Mondeel as a good-hearted person who got along with everybody.

“You’ll never find someone who has a bad thing to say about her,” said Davy Villarreal, one of the young woman’s close friends. “I don’t think anyone will ever have a bad memory of her.”

According to authorities, Mondeel died just before 5 a.m. Saturday after she reportedly ran off the road, overcorrected and then went into the north ditch and rolled off of U.S. Highway 251 about two miles east of Clarks Grove.

She was reportedly driving eastbound on the highway — east of Interstate 35 toward Hollandale — at the time of the incident.

No other automobiles were involved, and she was the lone occupant of her vehicle, a 1998 Chevy Cavalier. She was not wearing her seatbelt.

A small group of family and friends gathered late Sunday afternoon to pray and place a memorial at the site of the crash. The memorial contained a wreath with red ribbons, a softball glove and a hockey glove.

A 2005 Albert Lea High School graduate, Mondeel was heavily involved with softball during high school. She also played varsity hockey and soccer there.

Mondeel’s mother, Jody, said her daughter was a good athlete and excelled in many areas. She was very close to her family, who enjoyed going hunting, camping and fishing together.

Jody said she and her daughter also enjoyed shopping together.

“I always called her my baby girl,” she said. “She was an all-around good person. She’s going to be missed.”

The mother recalled several experiences she had with her daughter over the years, including one time when her daughter was young after the family first got their video camera. She said the camera caught her daughter in the act of teasing her brother and also licking all the plates before dinner one day. She said she has many similar funny little stories. 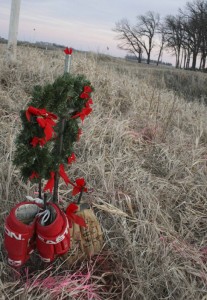 Family and friends of the late Jerri Mondeel on Sunday placed a wreath and other memorabilia off of State Highway 251 where Mondeel crashed Saturday morning and died. --Sarah Stultz/Albert Lea Tribune

More recently, Mondeel had been living at home with her parents, Jody and Jon, for almost a year, and she had recently been hired at Zareba in Ellendale, her mother said. She played co-ed volleyball and was on a dart league.

Mondeel’s mother said her daughter loved being around her friends and she liked keeping up with her friends on Facebook.

Villarreal, who grew up next door to Mondeel, noted Mondeel was a tomboy when she was younger and enjoyed playing football and wrestling.

“At times we would rather have her on our team than some of the other guys,” he said with a laugh.

Villarreal described Mondeel as “the life of the party,” who always wanted to make people laugh. She didn’t want to make enemies and fit in everywhere she went.

“Everybody’s talking about the good times we had,” he said. “Even if someone only got to meet Jerri for a day, they have great stories. There’s pictures all over Facebook with her smiling.”

Chelsea Barrett, another close friend, described Mondeel as a person who was good at resolving conflict between people and who saw the best in each person she met.

Barrett and Mondeel lived together for a year while both attended college in Mankato.